The Double-crested Cormorant is a big bird — it requires a long runway to take to the air.

The cormorant is demonized in Ontario where hunters are allowed to shoot the birds on sight. However here, the cormorant is rather an interesting curiosity. Indeed, there is a bay on the outflow of Kootenay Lake where it is consistently, but rarely to be seen. And it was there that I watched two cormorants this morning.

The cormorants didn’t seem to like being watched, even from a great distance. Upon spotting a watcher, they would systematically fly off, but that behavioural quirk gave me a chance to watch their liftoff from the water. Cormorants cannot merely jump into the air and fly off as does a mallard. Rather, they must run across the water surface so as to slowly pick up the speed necessary for flying. This is similar to the behaviour of a swan when lifting off from water.

Two cormorants take to the air. Notice the spacing of the splashes left by their foot prints on the water. The closer one (left) has just started its liftoff and so is moving slower than the distant one (right). Its splash prints are closer together. Further, the spacing of the splash prints of the distant bird progressively get farther apart as the bird picks up speed. Ultimately, each became airborne. 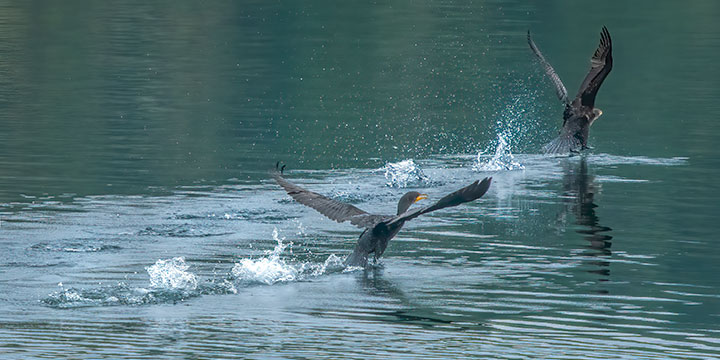