Some interesting lake features are most easily seen during the low water of April. Such is the case for the white line that runs around the rocky portions of the lakeshore. I last discussed the white line seven years ago in 2012. The present low water seems to be a good time to mention it again.

For the longest time I wondered whether the rocks were white because the lake had washed them clean, or whether the lake had deposited something on them. The answer is deposit. The deposit is calcium carbonate (CaCO3), a common substance found in rocks in all parts of the world. It is the main component of shells of marine organisms, snails, coal balls, pearls, and eggshells.

CaCO3 is poorly soluble in water, but it is soluble. It is carried into the Lake from the rocks in the surrounding mountains by the creeks. But, the amount in the lake water seems to be fairly small —  our lake water is sub-saturated in CaCO3. So, why is it even noticeable along the shoreline? There seem to be two answers: waves and declining water levels.

Waves splash onto the rocks wetting them. The water then evaporates, but the CaCO3 remains and piles up leaving a white deposit. Similarly, when the lake level drops, the rocks that were previously underwater are now exposed. The rocks dry and a deposit of calcium carbonate is left on them.

When the lake rises again, the white line is again under water where the calcium carbonate is slowly dissolved leaving the rocks clean and the cycle is repeated. 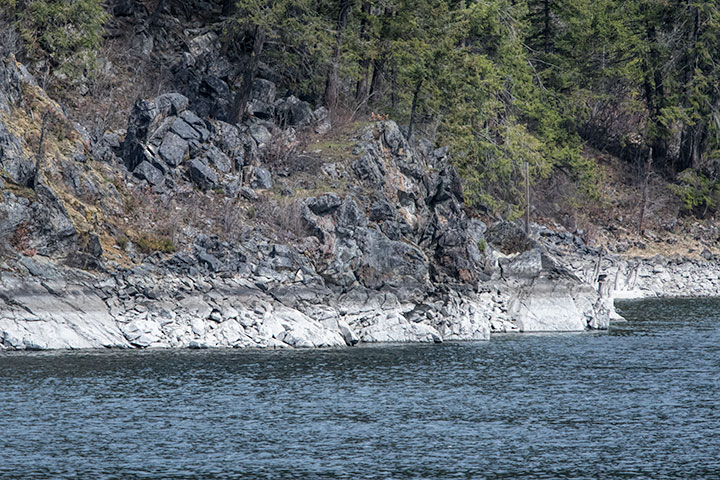 A close examination of these white lines shows a fair bit of fine structure that mirrors not only changing lake levels, but passing storms. 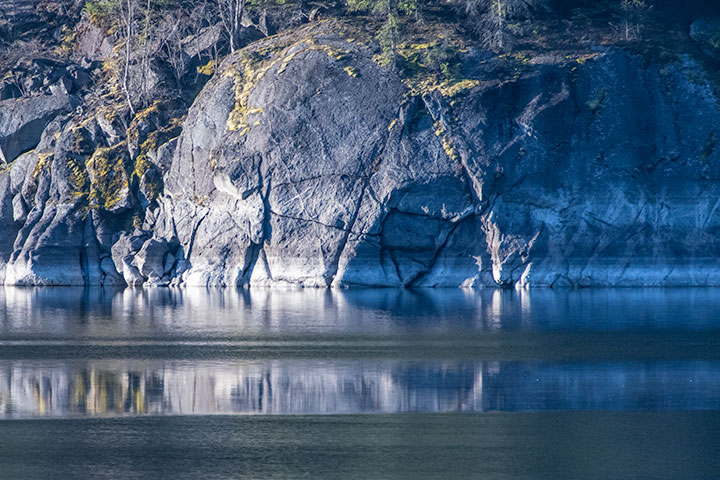 This entry was posted in scenes, weather. Bookmark the permalink.