This is the fifteen-hundredth posting to the blog, Exploring Kootenay Lake. The oldest was a decade ago in December, 2009. The blog is merely a notebook to which I regularly record delight with my surroundings. Yet, as these notes are on the web, they are viewable by others.

I did not even notice when I reached 500 postings, and I similarly breezed past the thousandth posting without a thought. However, about a month ago, I did notice that I was approaching 1,500 and decided to take it as an opportunity for reflection.

Viewers will have noticed that postings are primarily concerned with looking outwards towards nature, rather than inwards towards humans. This is purposeful. Websites about human activities abound. (Even conservationist sites seem designed more to persuade than enlighten.) Who needs yet another human-centric site?

Besides, the manipulation of others is not my thing.

I wander woods and waterways taking pictures of nature. However, I do not post my images to picture-sharing sites, for such sites strike me as having been designed to emphasize clicking over thinking. Rather, I post to my own blog where I use one or more images to tell a story about the behaviour of the natural world.

That is my thing.

(Below are many images.)

In this retrospective, I start by showing four images from the blog’s precursor, a website launched in 2005 for the simple reason that when I sought regional insights, I found no comprehensive source, so set about providing them myself.

Each year, at summer’s end, Kokanee gather in local creeks to spawn. The fish then die and provide a feast for others. 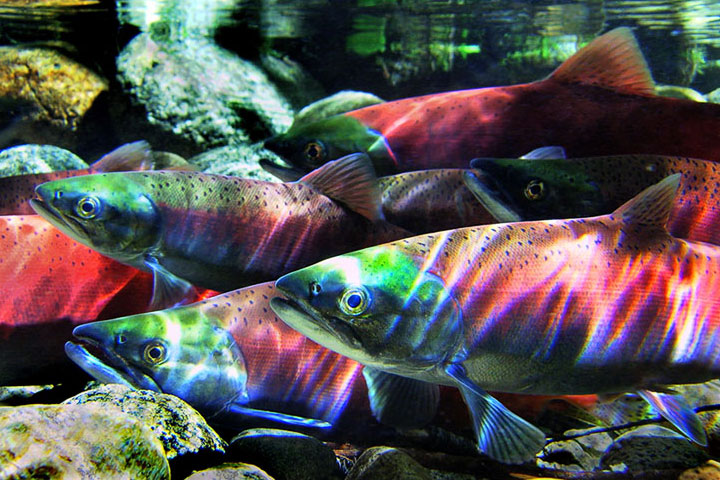 I delight in patterns seen in snow and frost. This one is uncommon. Most frost is formed on a surface when water vapour is cooled. Not so for these frost flowers. They grow just above the surface by the same process that produces steam fog: the mixing of water vapour with different temperatures. I find the resulting frost flowers to be beautiful. 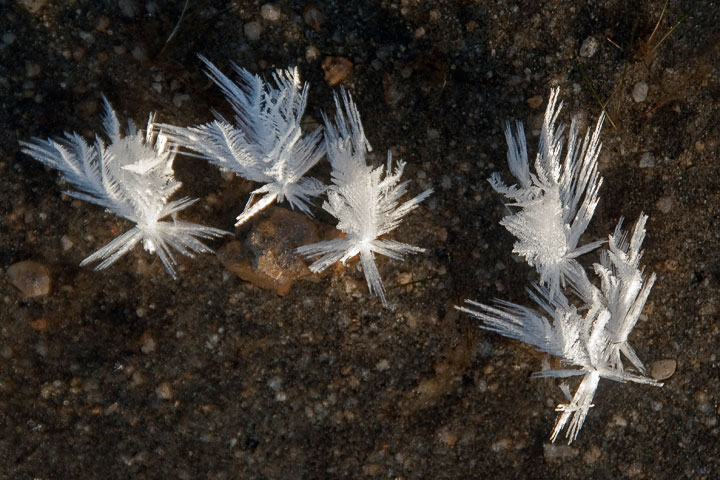 The region around the Lake used to have many fruit ranches. The fruit trees are long abandoned and it is likely that only the wildlife now know their locations. Here a white-tailed buck eats an apple from one of the remaining trees. 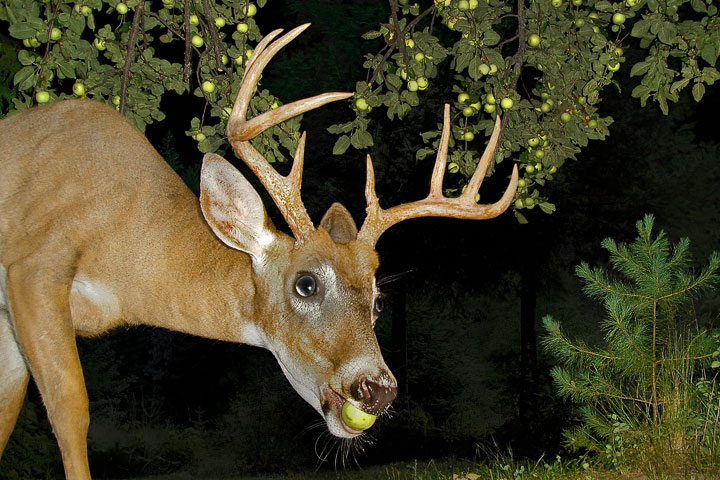 For the longest time, this matutinal shot of migrating Trumpeter Swans resting in the shallows on the east side of Kokanee Creek Park was my favourite image. 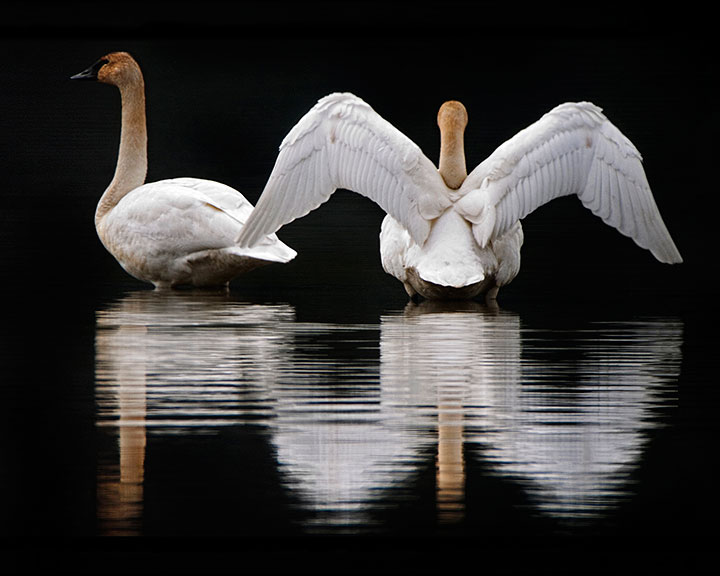 Below are a handful of images drawn from the five or six thousand pictures posted to the blog over this last decade. My present choices are somewhat arbitrary in that there are probably a few hundred more that would count as decadal favourites. As I look over the ones selected for today’s retrospective, I notice my neglect of many interesting posted topics: arthropods, wildflowers, clouds, lake processes, snow, frost, and dozens of mammals and birds. Below, I seem to have favoured scenes featuring either action or interaction.

2009
A steam devil moved along Kootenay Lake on a brisk and frigid December morning. Analogous to a dust devil, the steam devil originates when a vortex in the wind sucks up the steam fog spread over the Lake’s surface. I have photographed these devils a few times in the last decade, but this shot remains perhaps my favourite. 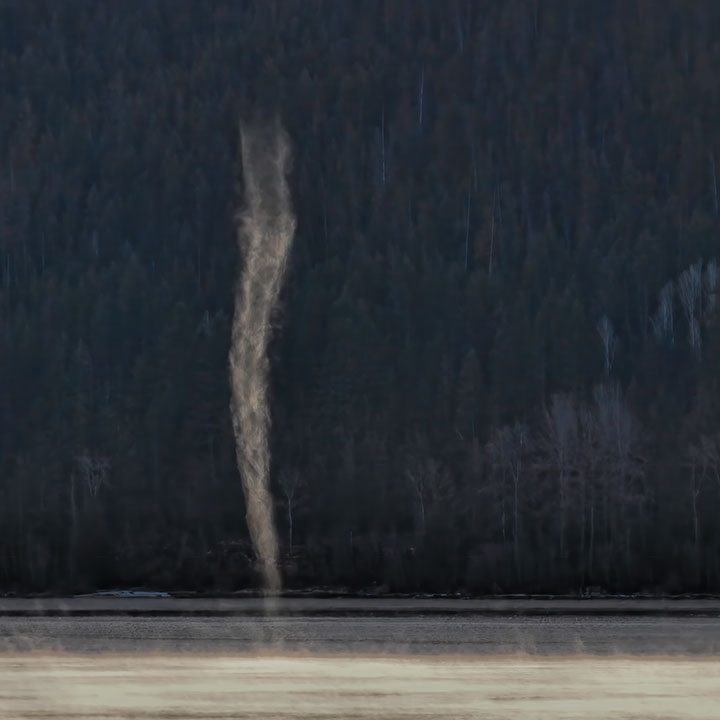 2010
White-tailed deer are a common sight at the valley bottoms. They are frequently seen browsing in yards and alongside roads. However, not only are doe and buck seldom seen together, but rarely are they seen charging headlong towards the camera. These two had been spooked by a dog and did not realize that I was watching along their path of retreat. 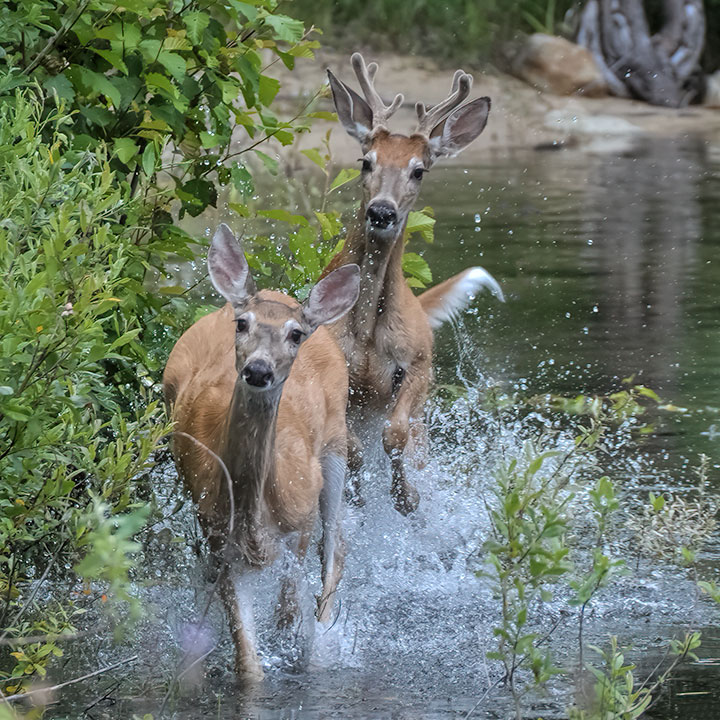 2011
The kestrel is our smallest resident falcon. It nests in tree cavities, but, as it cannot carve them itself, will use cracks in the trunk, or flicker cavities. There were two chicks in this cavity, one of which is urgently anticipating breakfast in the form of a headless bird served by father. The breakfast bird is headless because the male kestrel stopped on the way to the nest and ate its tasty brains. There is just no point in wasting the really good stuff on the kiddies. 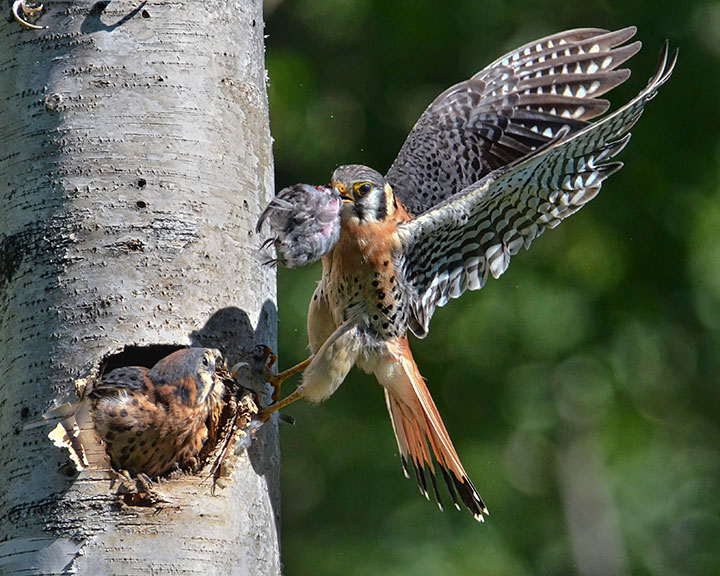 2012
Sightings of Ogopogo, a tremendously long, serpentine lake monster, have been reported on Kootenay Lake for 120 years. This was the first of two times I had seen it. Ogopogo undulated its way along the West Arm heading towards Kokanee Creek Park. When it spotted me watching from the shore, it abruptly turned and headed straight towards me. Wow, an opportunity to get close shots of our favourite aquatic cryptid. As Ogopogo neared, it resolved into a family of otters travelling in single file. What amazingly good fun. It is no wonder that Ogopogo has been reported in many of BC’s lakes, not just in those of the credulous Okanagan, where in 1989 a mayor persuaded the government to issue a protection order for it under the BC Wildlife Act. 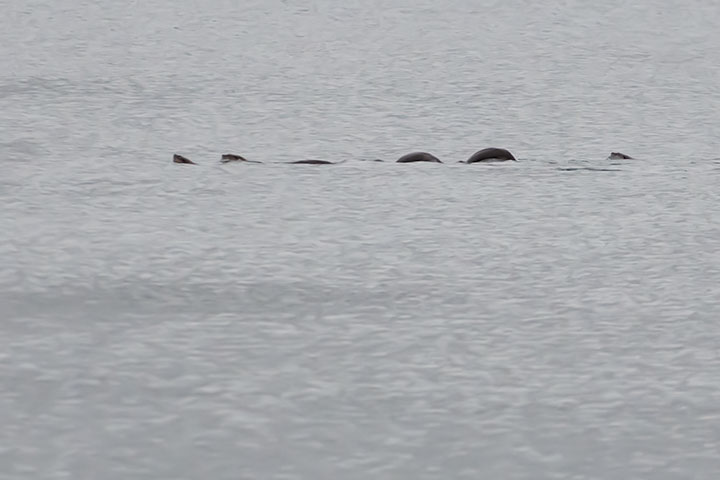 Actually a large vole, the muskrat is our most frequently seen semi-aquatic mammal. In the early spring, it leaves its characteristic waterways and wanders afar looking for a mate. Although seemingly looking right at me, I was probably unobserved: it has rather poor eyesight. 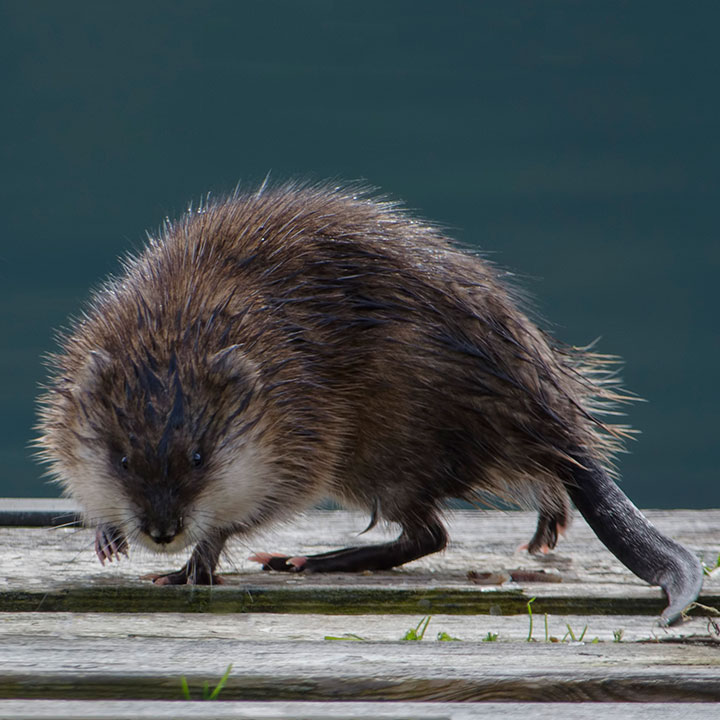 2013
The Great Blue Heron will eat anything it can catch and swallow whole. Here, it has stalked and, with a quick thrust, captured a vole. What is so striking about this image is the eye-to-eye contact between predator and prey. Does the vole realize that in a moment, it will be looking at the dark inside of the heron’s gullet? 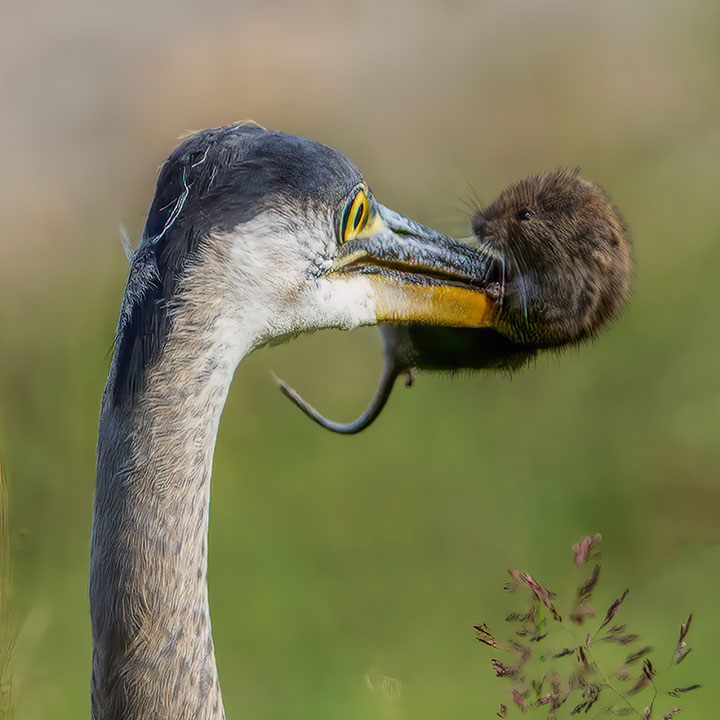 I am a fan of meteorological optics: patterns of light in the atmosphere such as rainbows, haloes, coronas, sky colours, and mirages. This wave cloud is iridescent. The colours arise from constructive and destructive interference of sunlight as it passes around uniformly sized droplets. 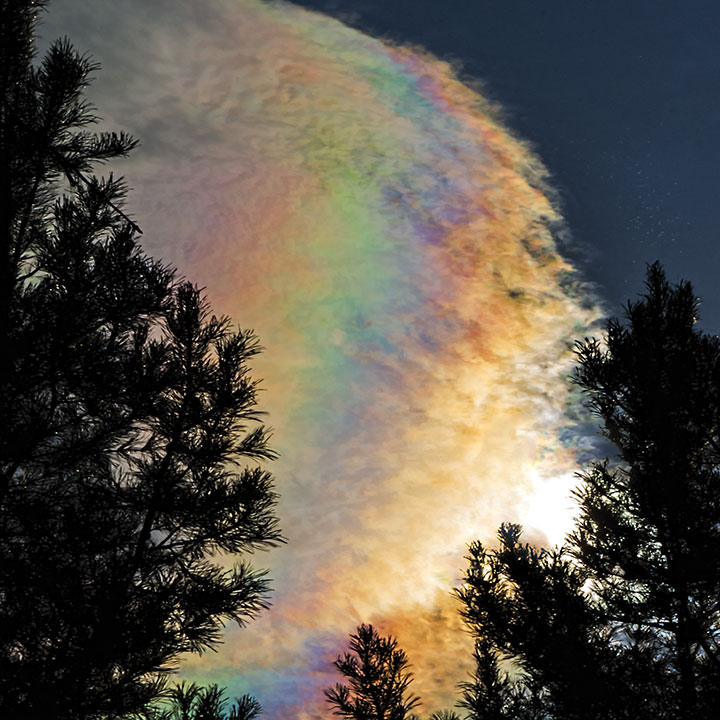 2014
I encountered this Bald Eagle as it was using its hooked bill to tear apart and eat a rather large rainbow trout. I rather liked its dynamic stance. 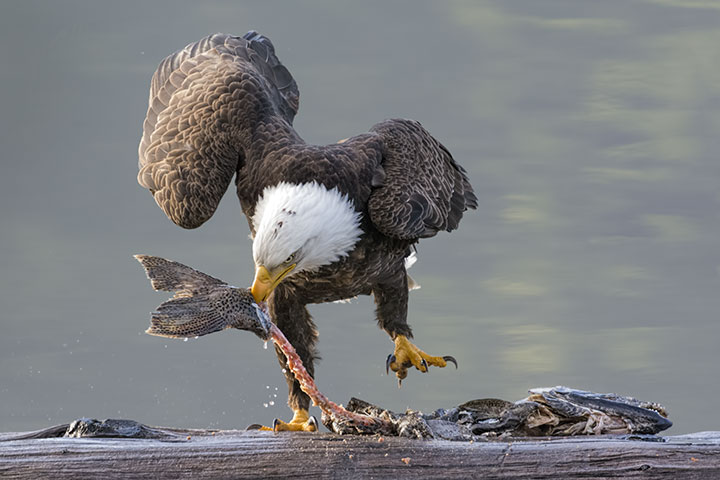 This rainbow picture was over thirty years in the conception. That is how long I had sought a low-sun, semi-circular, rainbow with the circle completed by a reflection in calm waters. Alas, stormy waters are usually too rough for a good reflection, and one is rarely in the proper position to see it. On this June evening, everything came together along the West Arm of Kootenay Lake. 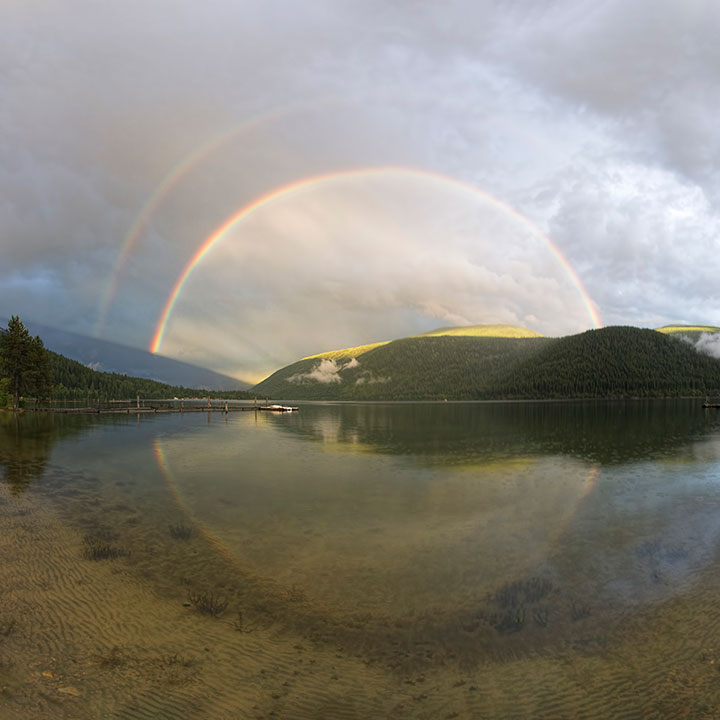 2015
This all-time favourite shot was not taken by me, but by my grandson, Finn (then, aged 11). It shows a grizzly sow with her three cubs. She has taken them into the brush to avoid the attention of the grizzly boar, whom she is watching. She is attempting to protect her cubs from the threat posed by what is likely their own father. As the sow will not mate with him when she has cubs, his simple solution is to kill the cubs. 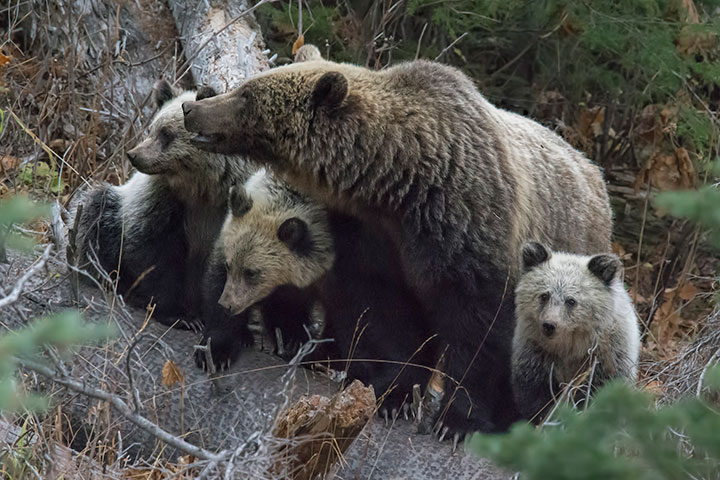 A delight of summer are Tree Swallows. During acrobatic flight over the water, they capture endless insects that are then fed to ravenous chicks. We cannot see what this father is bringing them, but his chicks’ enthusiastic anticipation is evident. 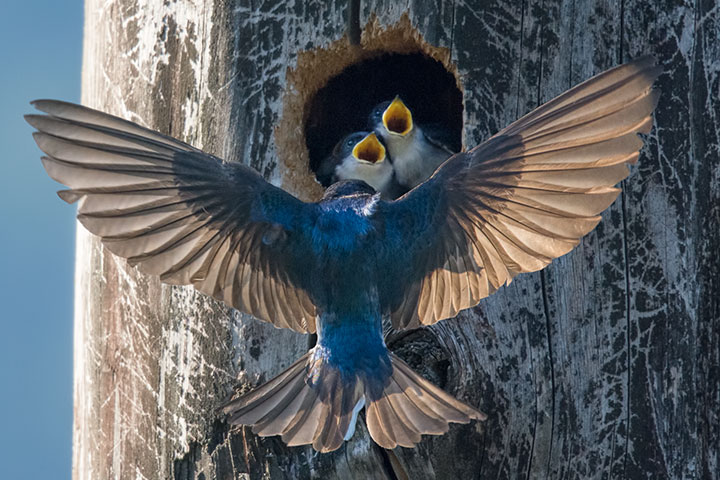 2016
A black grizzly sow stood up and challenged me (black is a known, but uncommon shade for grizzlies). She had taken umbrage at my watching her cubs. If anyone is wondering, I do not recommend having such a close encounter with a black grizzly — she was ticked. 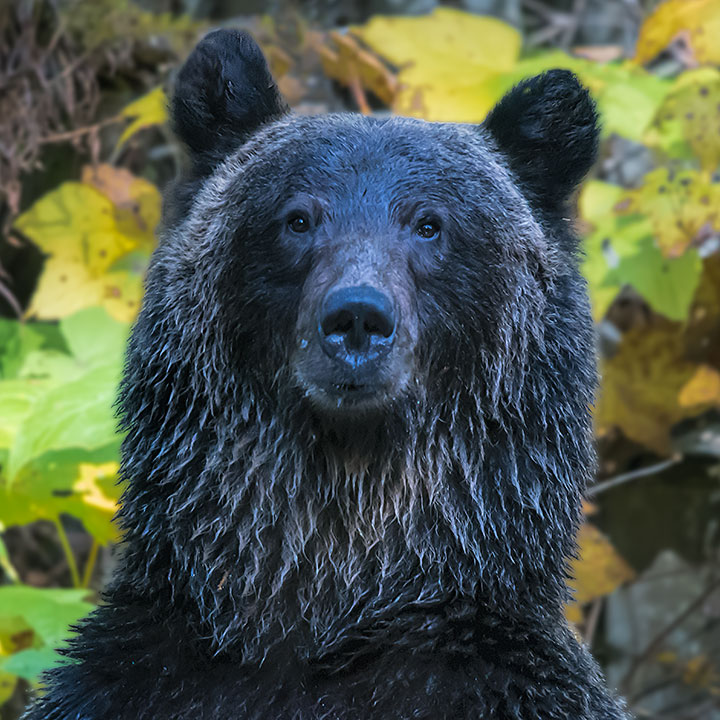 2017
The Merlin, the other one of our resident falcons, weighs only about 0.2 kilograms, but is amazingly feisty. Here it has attacked, killed, and is now eating a male Mallard, a duck that outweighs it by a factor of six. It even looks willing to take me down if I approach closer. 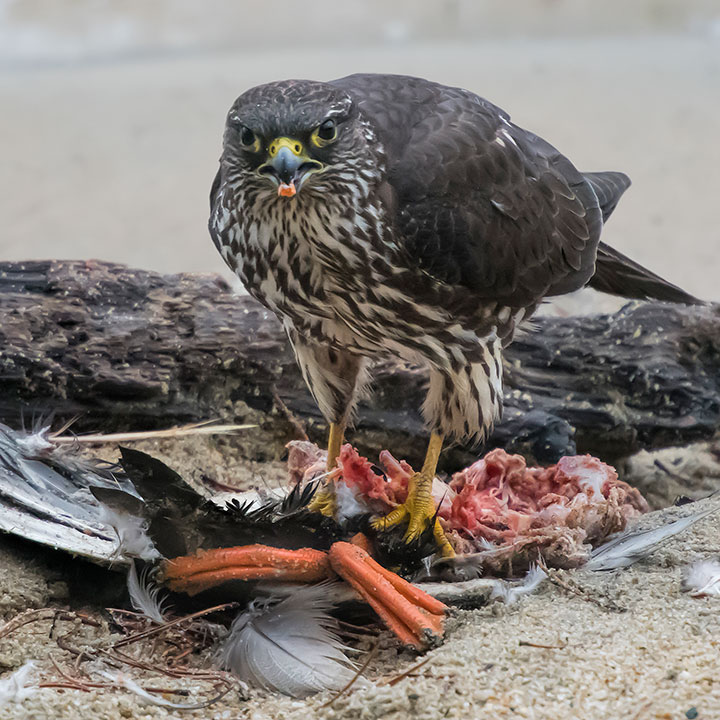 A black bear cub has just caught its first Kokanee. For weeks prior, mommy had caught the fish, taken them to the bank, and torn them into pieces for her cubs to eat. Now it was the cub’s turn to catch one — although he didn’t seem quite sure what to do with it. 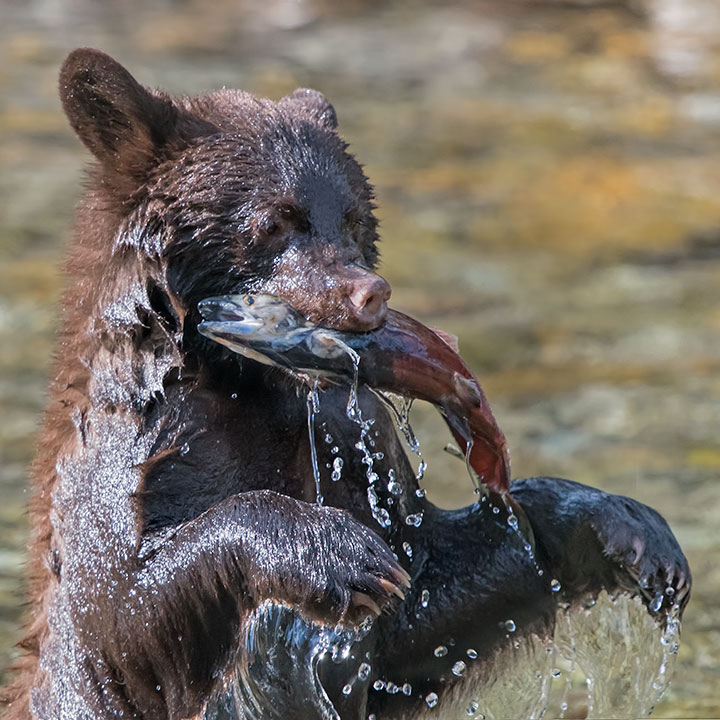 As birds lack teeth, the size of the food most can eat is limited by their ability to swallow it whole (an exception is raptors which use a hooked bill to tear a large item apart). This male Hooded Merganser has caught a sucker. It aligned the fish with its bill, then tipped its head back and swallowed it whole. 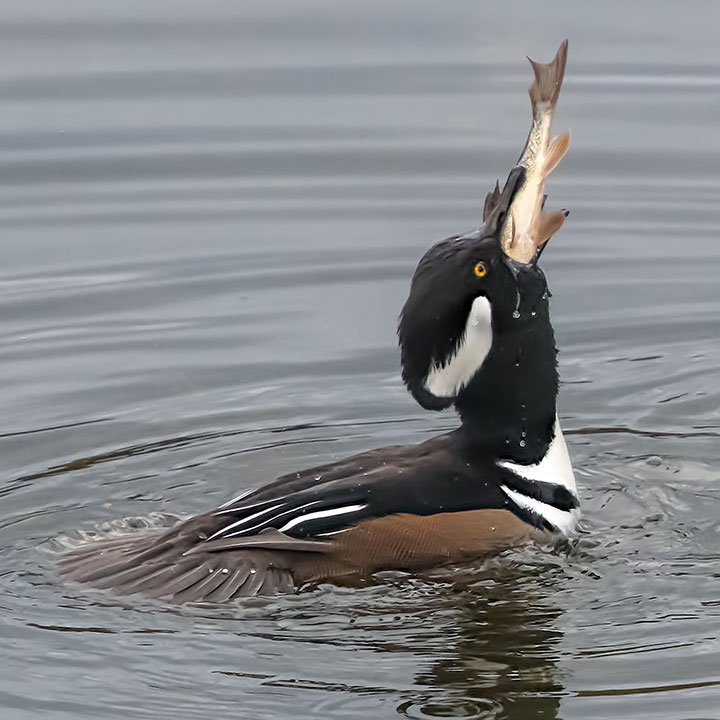 2018
Surely no fecund female Wood Duck could possibly resist this lad in his mating garb. 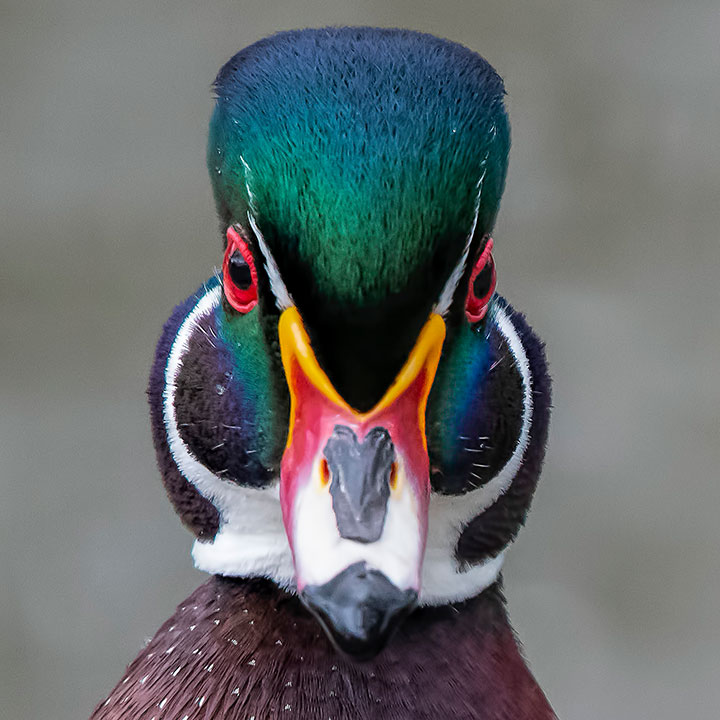 The Osprey feeds exclusively on fish that it catches live when it plunges up to a metre deep into the Lake. It then struggles to lift the fish from the water and fly off with its prize. Each participant is symbolic of the Lake — think Kokanee Creek and Osprey Ferry. So recording their interaction was a delight. But, just try to capture such a transient event somewhere out over the open waters of a large lake. 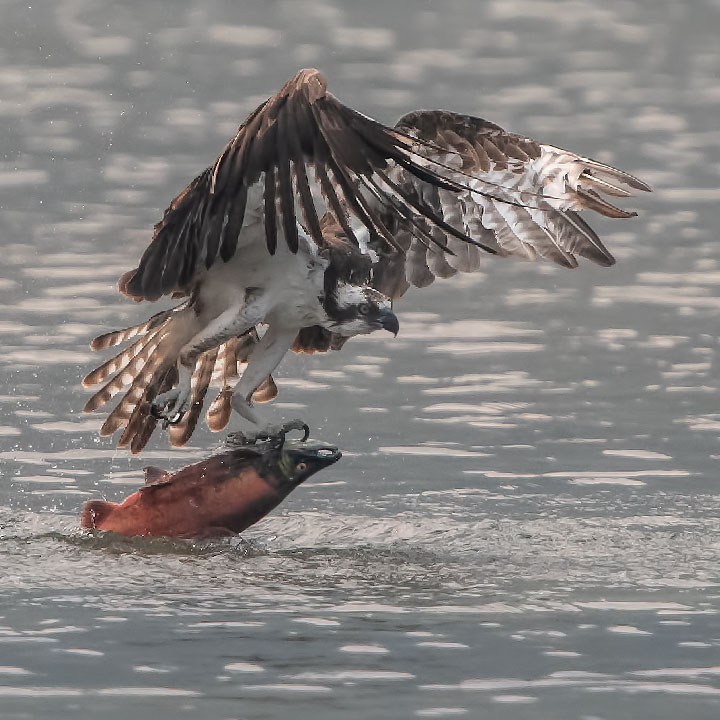 2019
Many finches are so attracted to salt that they flock to winter highways where they feed amidst the traffic. Ravens monitor the inevitable carnage from trees, and after a vehicle passes, fly down and pick up the dead or injured. Here, a Common Raven flies off with a male Cassin’s Finch. 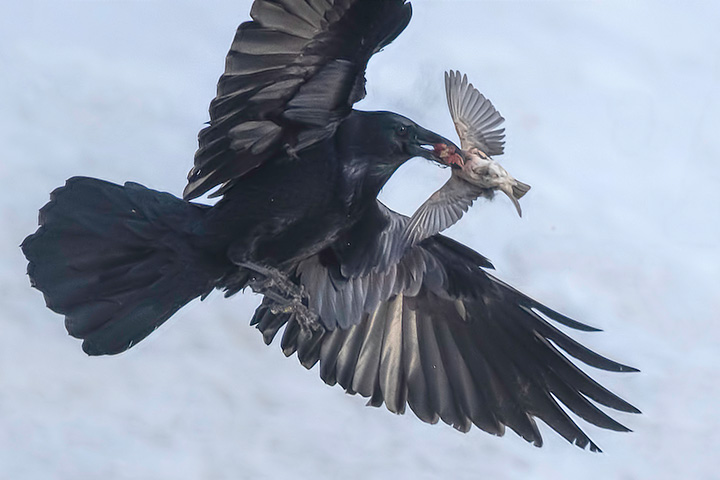 Now to merely carry on exploring local nature — all the while trying to avoid the front end of black grizzlies and the back end of striped skunks. 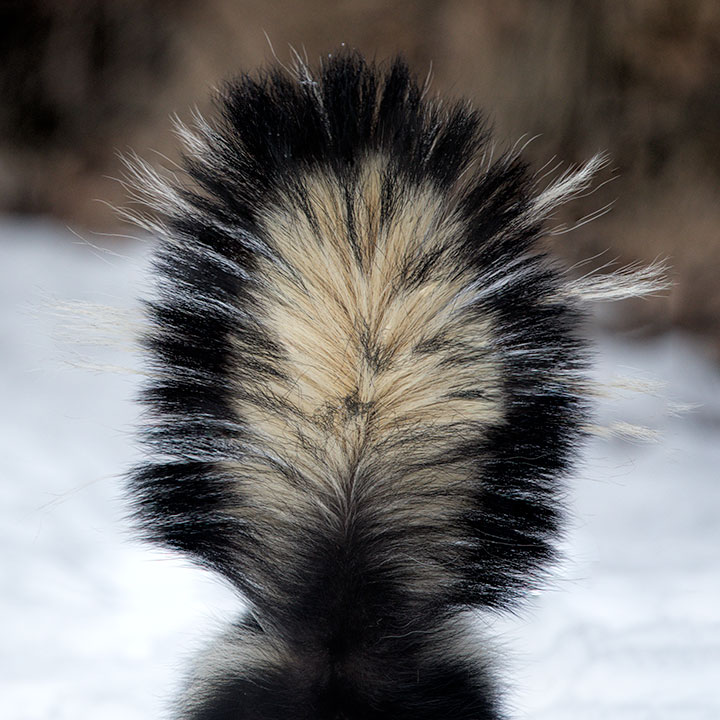 This entry was posted in birds, commentary, fish, mammals, weather. Bookmark the permalink.