We have all seen them: star-like patterns of melt on the shallow ice of bays.

With any luck, this posting will be followed by one with more information on these so-called lake stars, for much of their formation remains a mystery to me.

Over the years of casually noting lake stars, I had just assumed that they were the result of the drainage of surface melt water back through a hole in the ice. Evidence is accumulating that this is backwards. Here is what seems to be the consensus of the few who have explored the patterns.

• a new thin (a few centimetres) layer of ice forms over stratified water
• atop the ice, it is important that a thin layer of snow has fallen
• a small hole forms in the ice (Why does it form?)
• while the lake water immediately below the ice is at 0 °C, below that, it is warmer
• capillary action causes some warmer water to wick upwards onto the snow
• this arrived water depresses the ice surface increasing the flow of water
• arrival of increasingly warm water from below increases the melting

The formation of the arms of the star remain a mystery for me. However, what I had not realized is that the flow of water is up, not down. The snow atop the ice is a necessary feature because it serves to wick the lake water onto the surface. The wicking is important as it can bring up the warmer water from below, whereas buoyancy would not do so. (Water is densest at 4 °C so the warmer denser water lies a bit below the surface.) It also remains unclear to me why the lake stars form at some places but not others.

A common, but mysterious lake star forms in thin snow-covered ice on water. 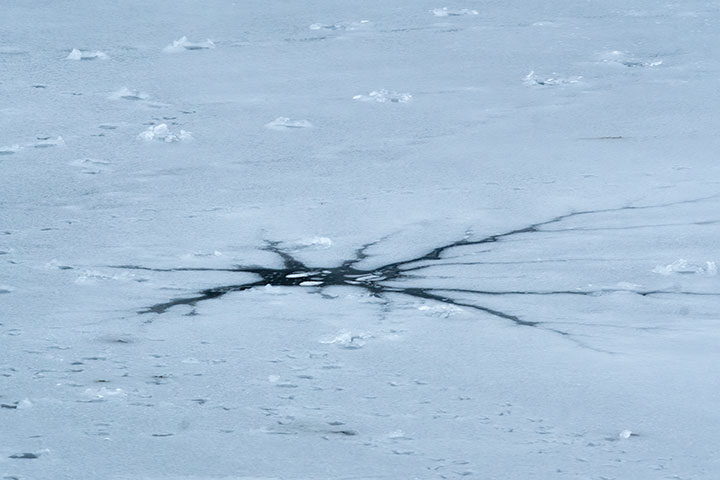