When there is a vigorous rain, but no wind, the surface of the Lake becomes patterned with both brighter and darker regions (pictures, below). Why does it do this? What causes it to look this way?

The answer is not obvious. Indeed, as I have been able to find no mention of these easily seen and reasonably common patterns in books or on the web, most people probably consider the questions irrelevant. Nevertheless, I press on with a discussion below the pictures. 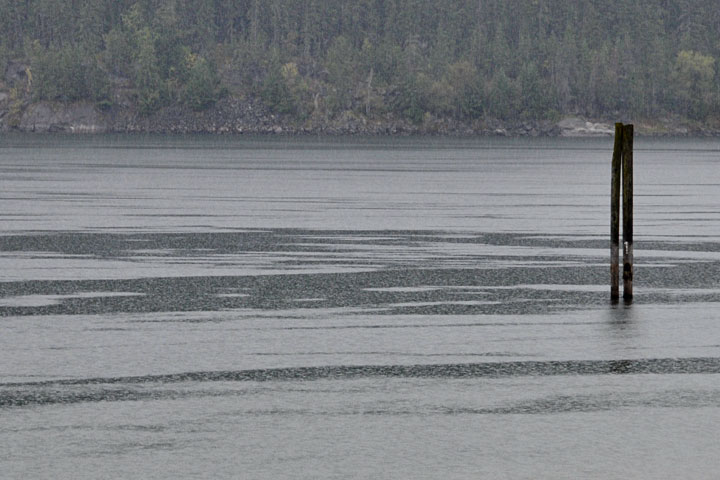 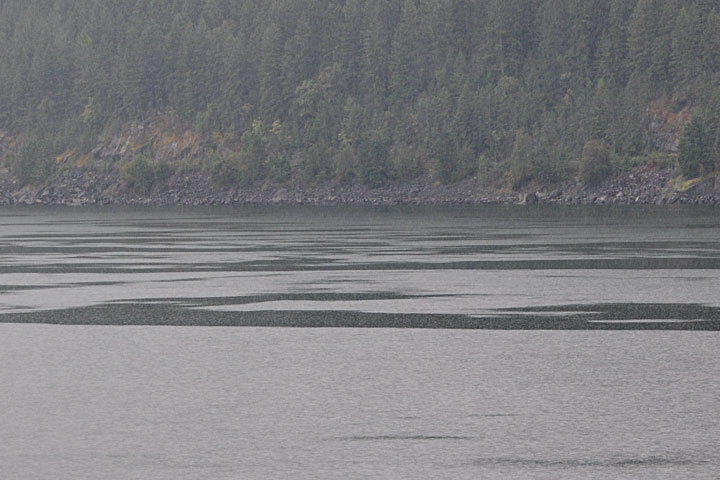 I can think of two different mechanisms that might give rise to these patterns: one involving surfactants; the other involving upwelling. My suspicion is that the second is the important one locally.

The patterns are always seen when it is raining and the wind is either light or absent. The raindrops hitting the Lake’s surface produce ripples which then flow out from the spot of impact. In the absence of the larger wind–produced waves, the myriad ripples produce a textured surface, one with an almost granular look to it.

But, why is this granular texture greatly diminished in some regions? After all, the rain is falling everywhere and so ripples are being produced equally everywhere.

Some backgound about waves and ripples:
Ripples are somewhat unlike the waves produced by the wind or a boat. For those big waves, the restoring force is gravity. For the ripples (also known as capillary waves), the restoring force is (the water’s) surface tension. Not only do the scales of ripples and (gravity-driven) waves differ, but their behaviours differ. The dividing line is a wavelength of about 1.7 centimetres, which corresponds to the waves which move slowest. For waves longer than this, the longer the wavelength, the faster it moves. Curiously, for waves shorter than this, the shorter the wavelength the faster it moves.

Some background about currents in a lake:
The water in a lake does not merely flow horizontally.  There are regions where the water gently rises to the surface (upwelling) and spreads out (divergence). There are regions where the surface water flows together (convergence) and sinks (downwelling). In nice weather, a boat trip out onto the Lake often reveals regions of convergence where surface debris has collected. Such a region is frequented by ducks which feed on the biota (leaves and insects) collected there.

The discussion that follows assumes that only ripples produced from the impact of raindrops are relevant. In the absence of wind and boats, the (gravity-driven) waves are absent. Further, there is moderate to heavy rainfall (not light or drizzly) with a sufficient number of large raindrops (say, a radius of a millimetre or so) to excite the slowest moving ripples (wavelengths between about 1.5 and 2 centimetres).

First possibility:
Surfactants suppress ripples in regions of surface convergence.
A surfactant is something on the water—usually small quantities of natural organic material from plants or algae—that alters surface tension. A surfactant reduces surface tension and so inhibits the formation of the ripples that gives the rained–on water the granular appearance. So, in regions containing a surfactant, the water will look calmer. Of course, oil or gas from boat traffic will do this also, but that source of surfactant is probably not relevant to most of the patterns we see on Kootenay Lake when it rains. So, places where surfactants collect may produce the smoother surface.

Second possibility:
Outflow impedes ripples from entering regions of surface divergence.
For the patterns seen in the rain, the divergent flow of upwelling regions is more interesting. Ripples which form in that region can flow out into the surrounding region, but ripples which form outside the region are impeded from flowing in to it by the mere fact that the ripples must travel against the current of the spreading water. So, by this mechanism, one would expect the regions of upwelling to be smoother. The fairly sharp boundary is the place where the outflow velocity matches the ripple velocity.

Now, it may be that each of these two mechanisms operates. I just don’t know. One would expect ripple suppression by surfactants to dominate regions of surface convergence, while ripple blocking by flow to dominate regions of surface divergence. All that I can be confident of at the moment is that the smoother (darker–looking) regions are places where their ripples are either suppressed or partially blocked.

(In time, this discussion will be moved to the Kootenay-Lake Website, but as yet there is no particular place for it.)

7 Responses to Lake-surface patterns during rain