Blossoms: This posting is just about white on trees resulting from water. Blossoms and seeds are another matter.

Following the reaction to my posting about a rime band, I thought it might be worthwhile to offer a guide to some sources of whiteness on trees.

Of course, the most obvious source of whiteness on trees is snow. When close at hand, snow is fairly distinctive (Jan. 1, 2012). However, when seen from a distance the assessment that the whiteness results from snow becomes less obvious — there are other possibilities. 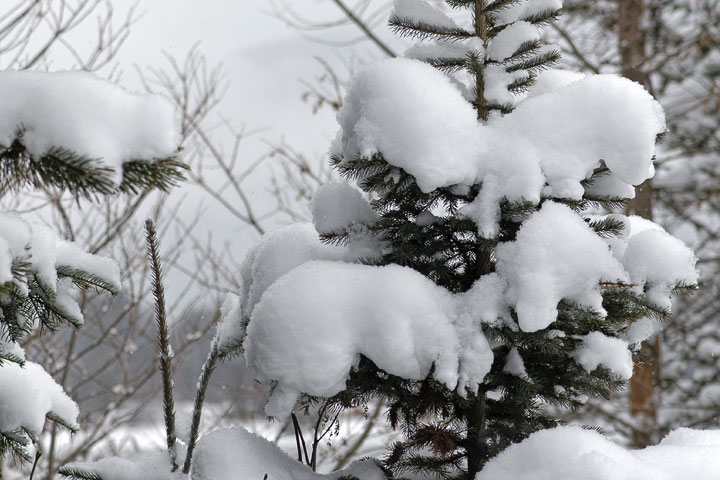 Snow that falls on a mountainside will often fall right through the melting level and turn to rain below (Dec. 10, 2015). However all the snow does not melt at the same rate. 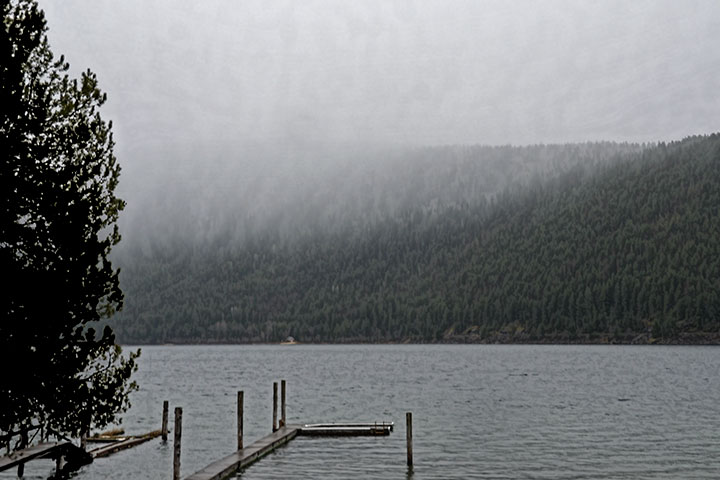 As the snow falls into air that has a temperature above 0 °C, the smallest crystals melt first, while the larger ones survive longer to fall farther. The result is that the bottom of the white is diffuse. The whiteness gradually tapers from extensive to nothing, without providing a sharp boundary in between (Dec. 13, 2015). So, the clue that we are seeing snow on the distant trees when the valley bottom is above 0 °C, is that the base of the white is tapered. 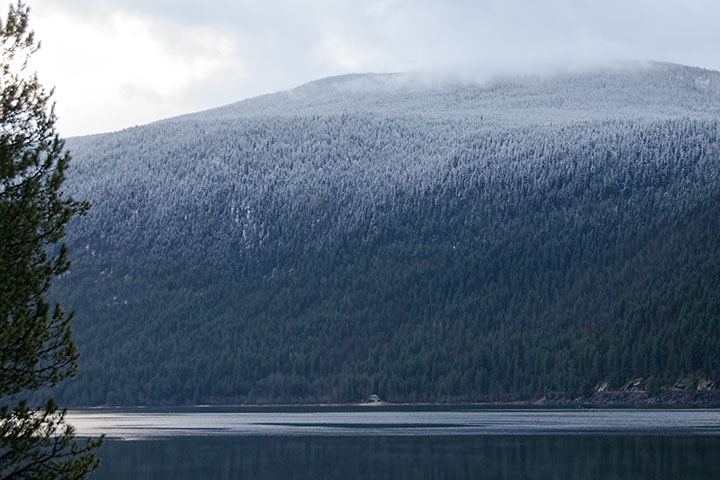 What then is one to make of the sight of a sharp lower boundary? This obviously did not result from snow falling through the melting level. This is the result of rime. A cloud of supercooled water droplets (T < 0 °C) had been resting against the mountain. As the droplets collided with the branches, they froze to cover the trees with rime. The sharp base results from the transition of the droplets from above the melting level to those below it (Nov. 26, 2005). 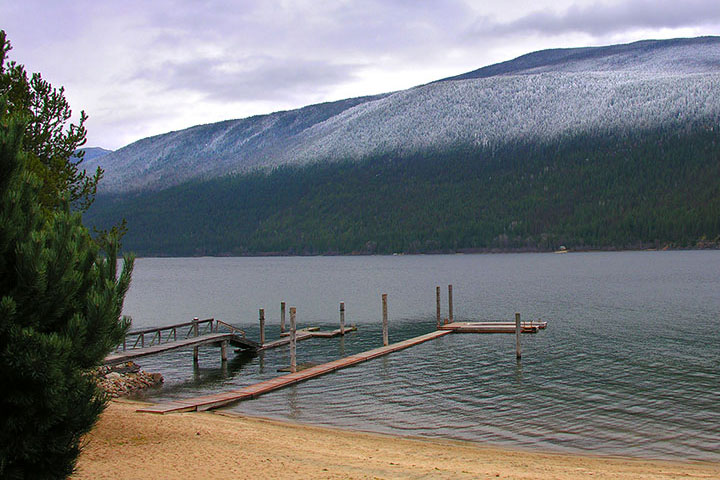 The sharp lower boundary of the whiteness in this picture of rime probably did not result from the bottom of the cloud, but rather from the presence of the melting level. But, this rime shows a sharp upper boundary also, and it will have resulted from the cloud top. The result is a band of rime across the mountain (Nov. 29, 2013). 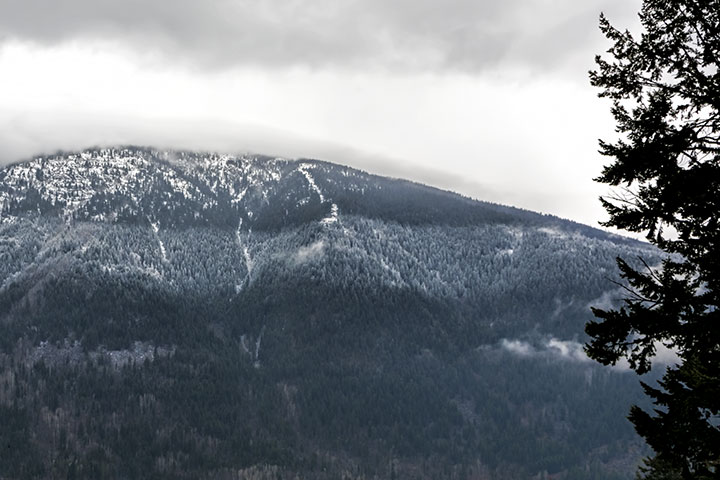 Often when the temperature is low, there will be steam fog rising from the open water of local creeks. Then the trees alongside the creek can be covered with rime as the supercooled fog droplets collide and collect on them. 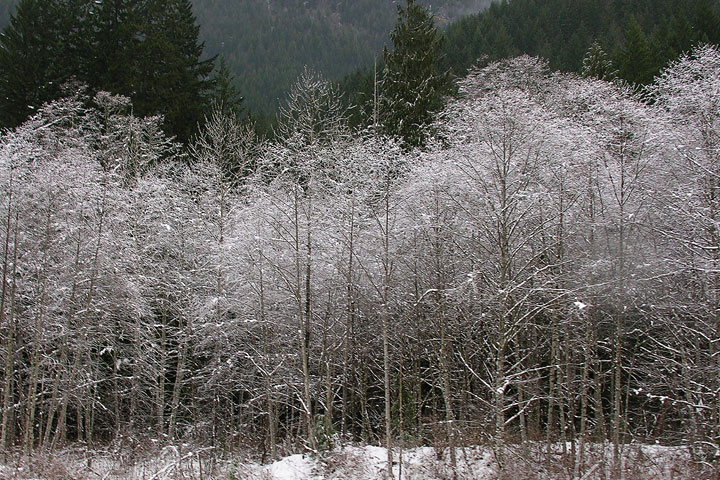 Now for something completely different. This is a picture of the sylvanshine, and although it looks to be a picture of snow-covered trees in the winter, it is actually retroreflection from dew-covered trees in the summertime when seen with a spotlight or the headlights of a car. Only a few species of trees can do this — those which have leaves (needles) that have a rather large contact angle with water. The effect is similar to that of retroreflective glass-beaded highway signs. 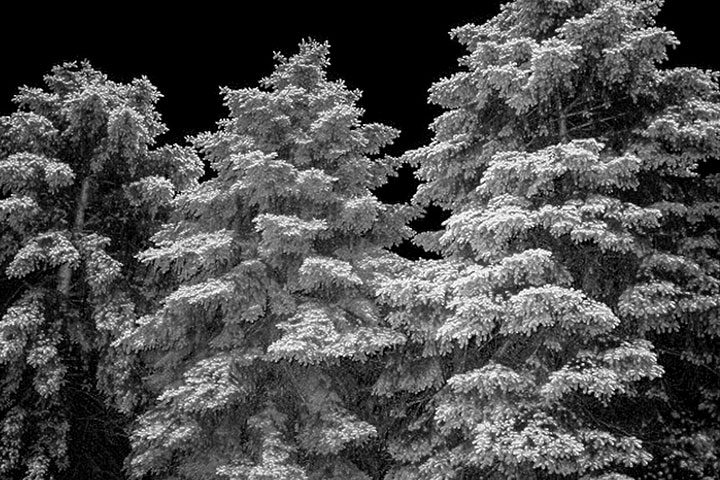 11 Responses to Whiteness on trees