This topic is probably of little interest to non-boaters. Indeed, it isn’t even of much interest to boaters on most of the lakes of the world. However, for our boaters — bingo.

The topic is the rip.

not the topic at hand: A rip current is a strong, narrow current of water which moves directly away from the shore, cutting through the lines of breaking waves like a river running out to sea.

If one does a web search on the word, rip, what comes up are discussions of rip currents (see side box). This is NOT what is being discussed here. Curiously, the meaning I want is closer to the dictionary’s: “a stretch of … rough water … caused by the meeting of currents.” But, even this falls short of the physics (as a dictionary’s proffered explanations often do). The rough water of the rip results when waves must adjust to an increasing counter current.

Boaters on the ocean refer to this problem as “wind against tide” and discuss ways to minimize the difficulties. But, while significant, theirs is merely a particular example of the problem of waves adapting to an increasing counter current.

OK, what has any of this have to do with Kootenay Lake? Well, we have rips. Further, I have been in a small boat that has been tossed around in a rip. Here is how it is usually manifested on Kootenay Lake, and in particular on the West Arm (although I have seen it on the Main Lake).

Producing a Rip: Longer water waves travel at a greater speed. If the waves move into a region with a strong counter current, they are abruptly travelling too fast for the flow. So, wavelength decreases to match the new situation. To conserve energy, amplitude increases. The locally rough water is called a rip. So, a rip results when waves must adjust to a region with a lower wave speed.

The West Arm of Kootenay Lake is divided into lakelets by narrows (which are, in turn, caused by peninsulas resulting from creek deltas). Now, consider a west wind causing gentle waves to travel eastward across a lakelet, but against the weak flow of water. The waves soon move into the adjacent narrows where now the stronger flow is opposite to the wave propagation. The result is that wavelength shortens, amplitude increases, and many waves break as whitecaps. Produced is a region of rough water: the rip.

This is a stretch of water on the west side of the Harrop narrows. In the lakelet to the west, the waves are gentle, but as the waves enter the fast flowing water of the narrows, a rip is produced. 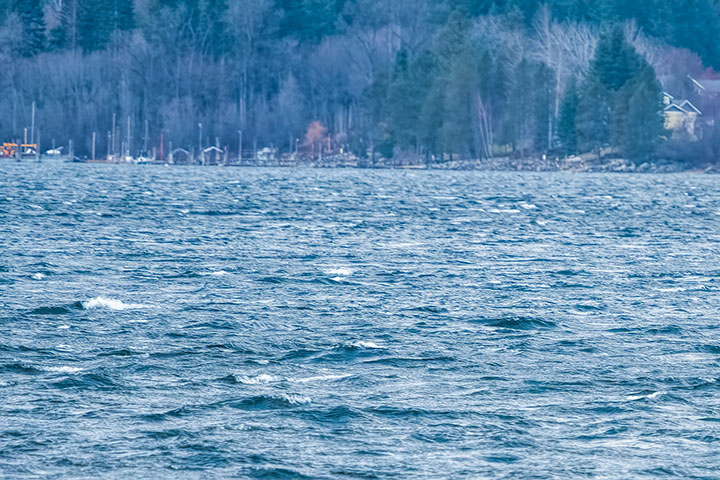 It is rather difficult to get a contextual picture of a rip: one that shows both the calmer inflow to the west and the turbulent entrance region. This is a view looking west through the nine-mile narrows. Beyond the dolphin is the rip. Beyond that is the gentler surface of the lakelet. 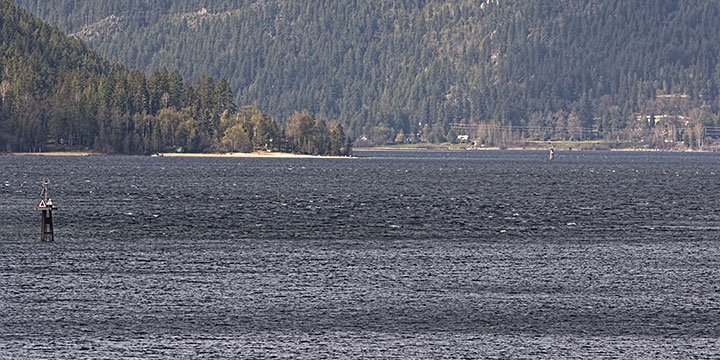 I mentioned earlier that I had seen a rip on the Main Lake. How can that be when there are no narrows to locally increase a flow against the wind? Well, the rip was seen at the north end of the Lake where the Duncan River entered. Southerly wind-driven waves were flowing towards the estuary. When the waves encountered the rapid outflow of the river, they had to adapt to the counter current and a rip was produced.

It was noted earlier that: “a rip results when waves must adjust to a region with a lower wave speed.” The situations described are not the only ones that produce this. When I said earlier that “Longer water waves travel at a greater speed“, I was describing waves in deep water. In shallow water, wave speed is proportional to the square root of the water depth. So, as waves flow up a sloping shore, they are constantly adjusting to a region with a lower wave speed. And, of course, we regularly see waves breaking along a sloping beach. However, at the shore, such waves do not get called a rip — yet, it is the same phenomenon, but one so familiar that it is no longer noticed.

Finally, I have seen a rip in the shallow water over a submerged sand point. In those shallows the lower wave speed prompted incoming waves to adjust and become chaotic.