Yesterday, a friend told me that she had just seen a Golden Eagle that was hunting by the lakeshore. I was assured that it must have been a golden as it was particularly large and brown.

Hmm…, I was skeptical that a golden was what was seen. The problem is that a Golden Eagle didn’t quite fit the proffered description. Consider, a Golden Eagle:

• prefers to hunt small mammals in the uplands, not fish at the lakeside
• a Golden Eagle is not particularly large, being slightly smaller than a Bald Eagle
• is brown, but so is a juvenile Bald Eagle, which does hunt over the lake
• can be distinguished from a bald by, among other things, it golden nape

Today, I visited the nest of a Bald Eagle, where its two (brown) chicks were holding court. When they fledge, they will appear larger than their parents for their feathers will not have been worn. However, they will lack the golden nape.

Juvenile Bald Eagles are often misidentified as Golden Eagles, a result of being both brown and of wishful thinking.

Looking for an illustration, I visited a Bald Eagle’s nest and photographed two (brown) Bald Eagles chicks (and mommy) sitting on a nest. 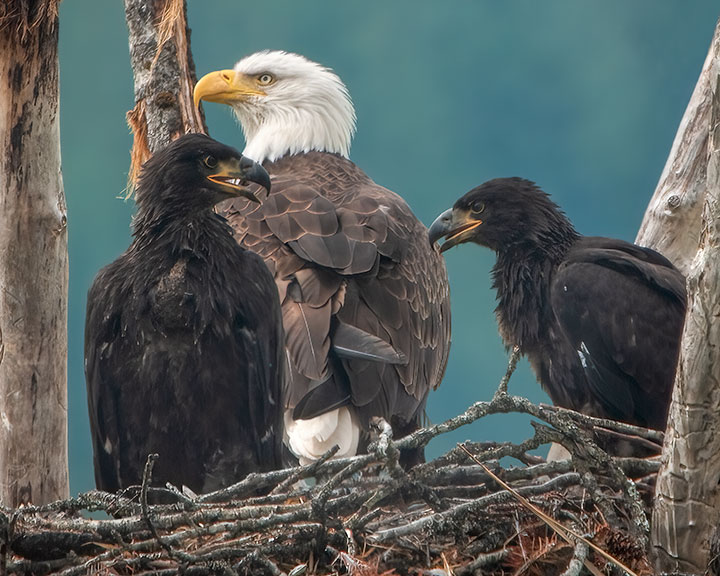 3 Responses to Bald, not Golden