Much of bird watching involves creature identification, along with tracking seasonal migration.

However, this posting is about neither of these; rather, it treats obscure behaviours of a duck, the Hooded Merganser. The issue is that of the duck optimizing travel so as to minimize the energy required. As do many waterfowl, this duck both swims and flies. So, an example will be chosen from each mode of travel by using two pictures taken about an hour apart.

Swimming
Creatures that travel over the surface of water (ducks, otters, kayaks, supertankers) and are supported by buoyancy (so, are not planing) leave waves in their wake. It takes energy to create a wake and this is energy the creature must supply. Creating a wake requires work and so is a drag on travel.

Transverse waves are generated at two locations: the bow (front) and the stern (back) of the duck. As they superimpose in the wake, these two waves can either interfere constructively to produce large waves (producing a maximal drag), or interfere destructively to cancel one another (producing a minimal drag). Which happens depends upon the speed of the duck and so is under the duck’s control. Of course, the Hooded Merganser does not calculate this, but rather senses the effort it takes to move and so travels at a speed that minimizes its wave drag.

While divergent waves remain, the hoodie’s transverse waves have been substantially canceled. 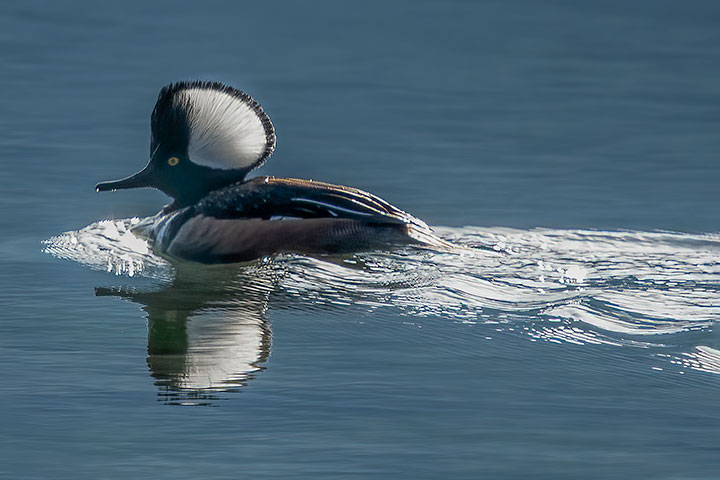 Parasitic drag results from energy lost to turbulent eddies shed by objects moving rapidly through the air, such as a runner, automobile, train, bird, or aircraft. Parasitic drag increases as the square of the speed.

Induced drag is equal to the force required to provide lift and results from the change in direction of air flow around a wing which supports the weight of the flying object. Induced drag changes inversely with the square of the speed.

However, the Hooded Merganser has an additional consideration: its hood (crest). Parasitic drag is proportional to the forward-facing cross-sectional area of the bird, and that area would include the hood if the bird were to keep it erected, so the bird collapses its hood when flying.

While both of these behaviours — minimizing wave drag when swimming, minimizing parasitic drag when flying — easily pass unnoticed; each is crucial to the duck.