Requiem for a snag

I didn’t know the tree when it was alive and bore leaves. Indeed, I don’t even know what species it was. I had known it only as a large snag and a wildlife tree for the last four years. Today, on a windless clear day, and with a resounding CRACK, the whole tree tipped over. Now on the ground it began a new stage in its evolution.

While many small birds visited it, in August its sunlit position beside a spawning stream meant that big birds, such as Bald Eagles and Turkey Vultures, hung out there as they hungrily eyed the Kokanee spawning in the waters below. Indeed, it was the Turkey Vultures I had come to watch for they used that particular snag in an unusual way. At night, they would roost elsewhere in the forest, but, with the rising sun some would gather on the snag and spread their wings in the sunlight to warm themselves after a cool-night’s sleep. I have come to liken the comfort the vultures seemed to experience from this stance as their version of a morning cup of coffee.

All of that came to an abrupt end early this morning. A Turkey Vulture was perched with wings spread in the sunlight. In response to an initial snapping sound, the vulture flew off. It returned quickly and tried to resume the pleasures of the warming sunlight, but then with the ultimate loud CRACK, the vulture took to the air again as the snag slowly tipped and then thundered to the ground.

With the rumble of the snag crashing to the ground, the vulture’s favourite warming tree was gone leaving no obvious replacement.

A Turkey Vulture perches spread winged in the early morning sunlight. It seems that this way to warm after a cold night was equivalent to their morning cup of coffee. They might now need to go cold turkey (so to speak). 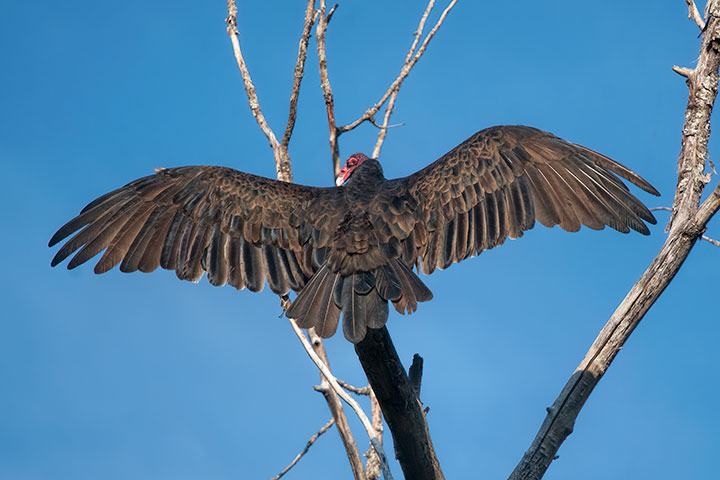 I only had my birding lens handy, so when the snag abruptly started to fall, I captured a portion of it and this looks rather as if it were merely a leaning tree. No, this trunk was on its way down and thundered to the ground. The snag’s new existence, alas, does not include spread-winged vultures and as being the only nearby snag to catch the early sunlight, the vultures might now have to do without their morning coffee. 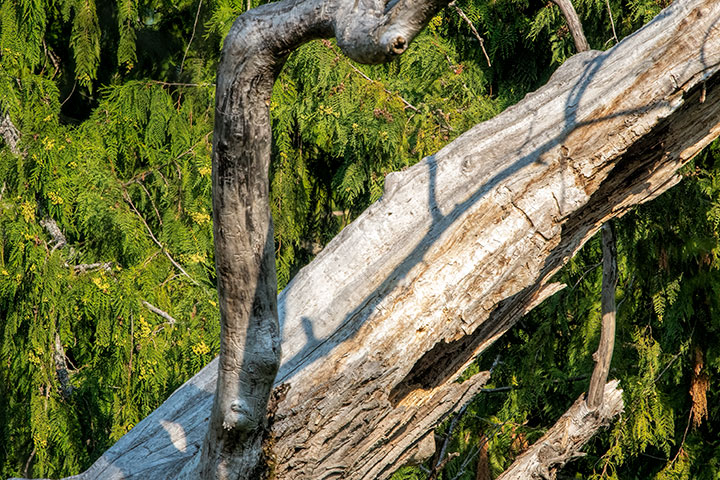 5 Responses to Requiem for a snag