This comprises a group of August’s images that lacked postings of their own. It is a mixture of local shots and ones from the around Vancouver. Yet, the Coastal ones are all of creatures (one fishy exception) also found at Kootenay Lake — albeit sometimes only occasionally. I open with raptors, all but one being local.

August is the season when Osprey chicks fledge and head out on their own. Here an adult on the nest is holding a fish, while a fledgling lands. 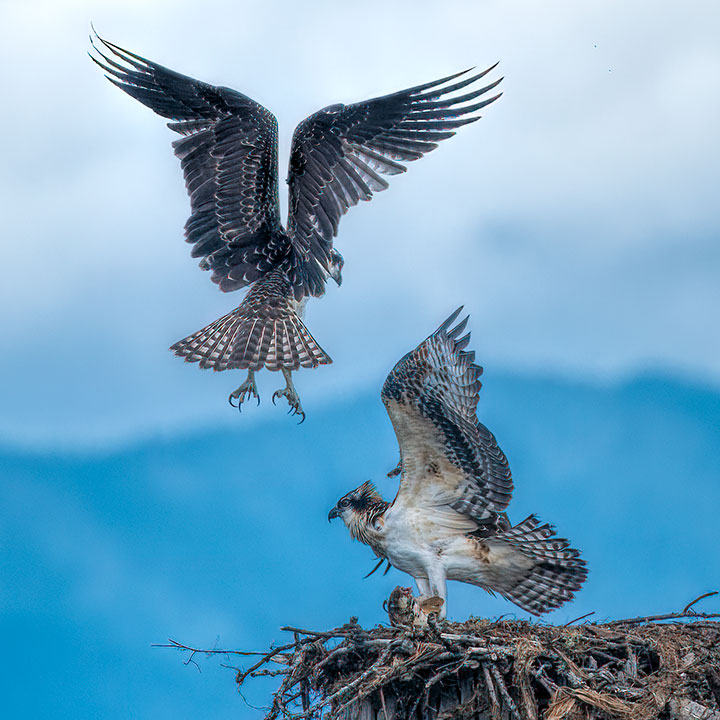 One fledgling watches another arriving with a chunk of fish. The fish was not shared. 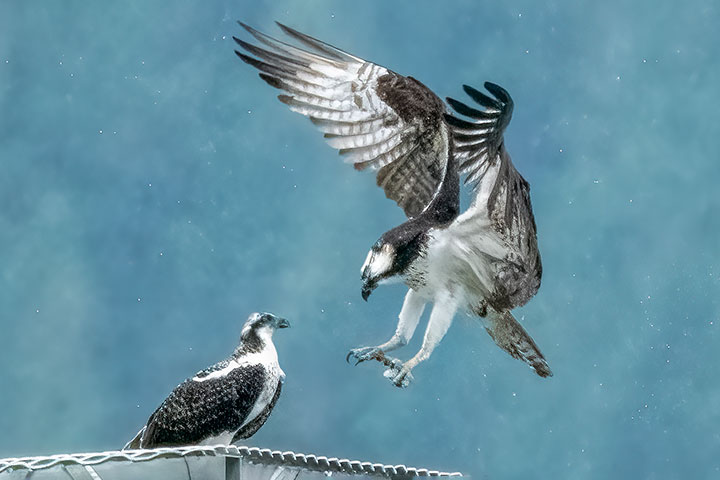 The Cooper’s Hawk is a bit uncommon everywhere. This one was seen in Burnaby. 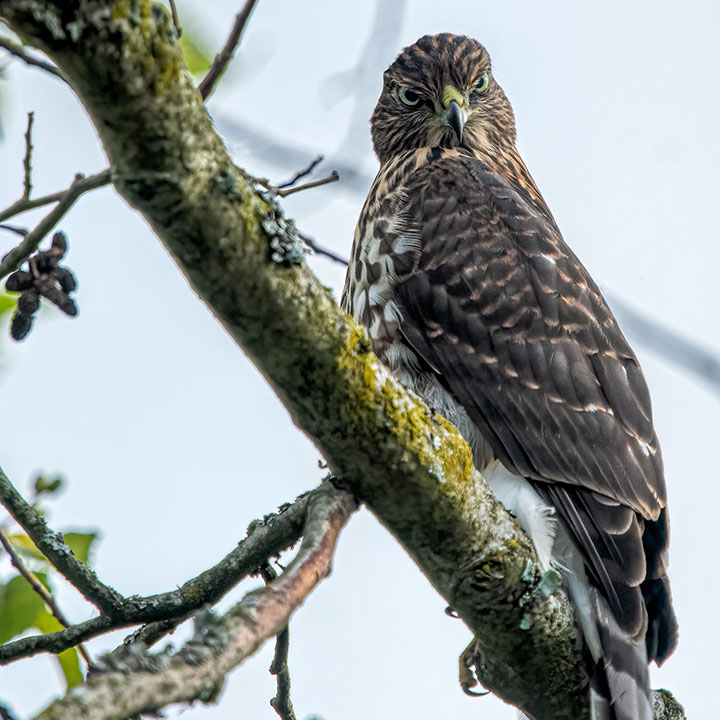 Despite range maps that suggest that the Merlin is strictly a summer resident of Kootenay Lake, it is a year round staple of the region. As is evident from this shot, the Merlin is not easily spooked. Maybe it is sizing me up as a meal. 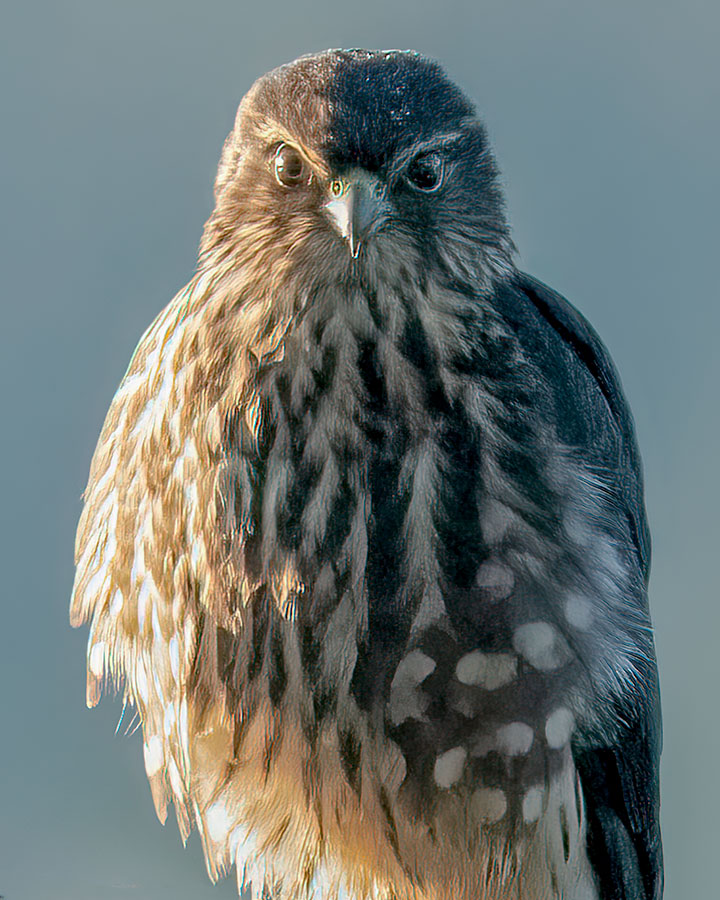 Bald Eagles abound around the Lake, but capturing a close dramatic shot requires insight, such as knowing to visit a spawning creek in August. Photo courtesy Cynthia Fraser. 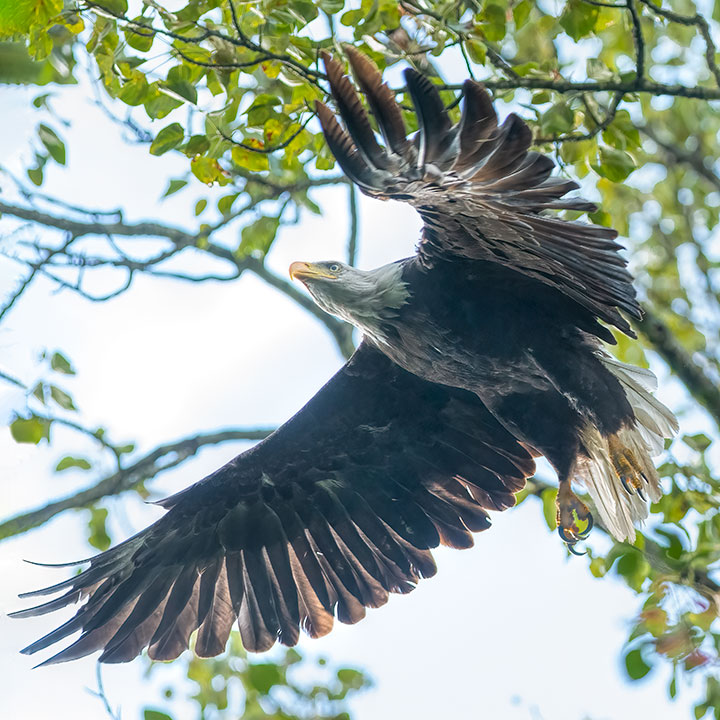 Another bird that hangs out around spawning creeks is the Great Blue Heron. 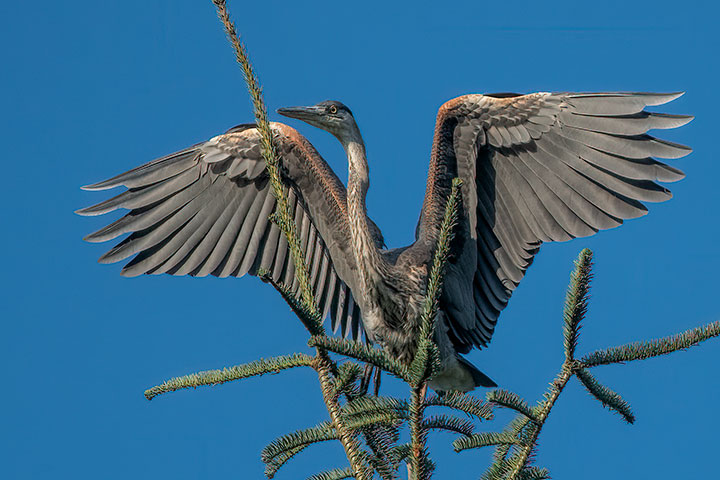 Now, this is a morsel that many raptors would happily grab: a house mouse. Of course, its name does not mean that it lives in houses any more than does the House Finch. This one was definitely wild. 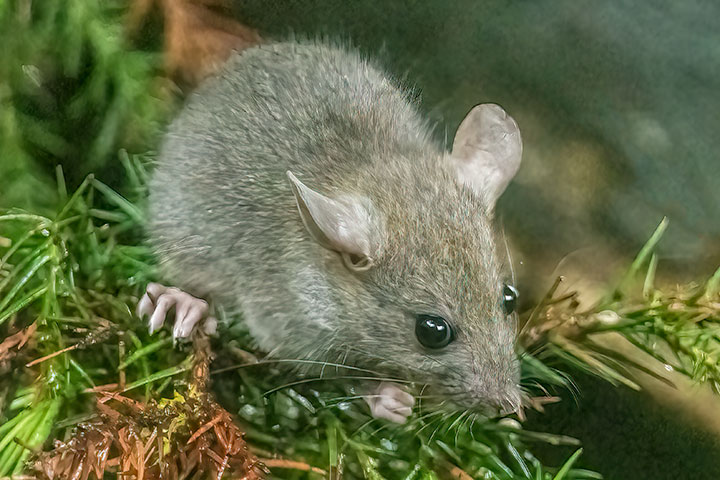 A crow inspects roadkill (a skunk). However,  traffic was too disruptive for it to feed. 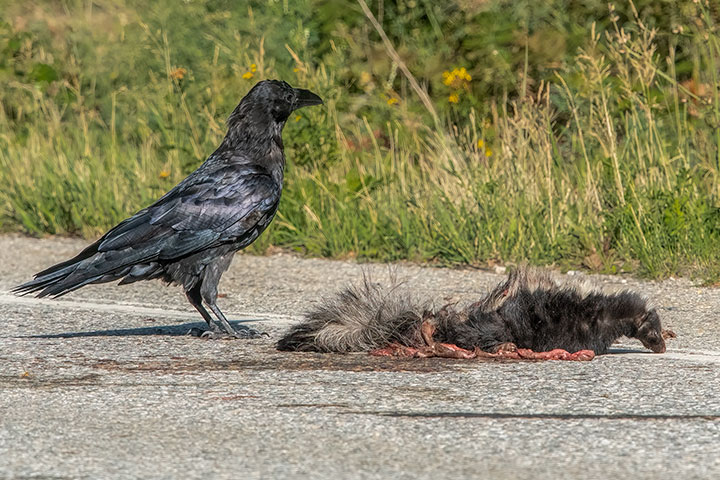 We have river otters on the Lake, but the fact that this picture was taken at the Coast is evident by their catch: a starry flounder. 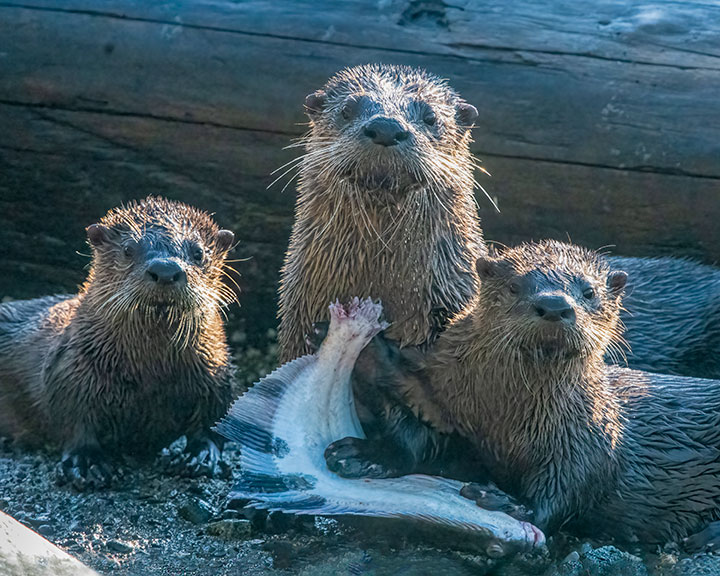 This is the season to admire a wide range of migrating shorebirds. This is a parade of Long-billed Dowitchers. 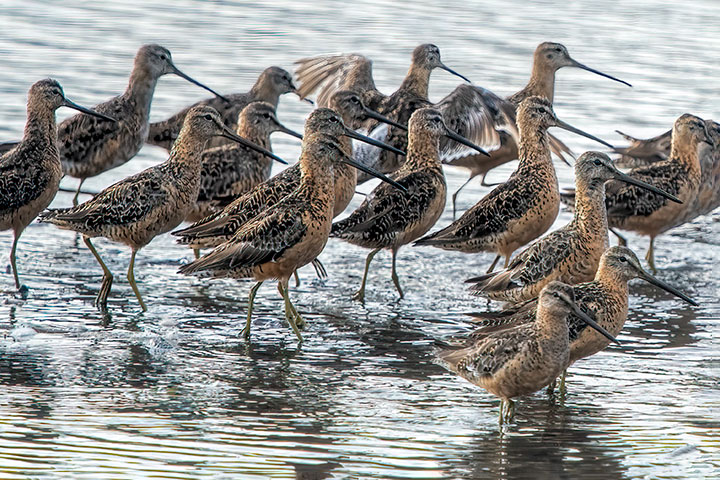 This Downy Woodpecker is on a cedar tree. 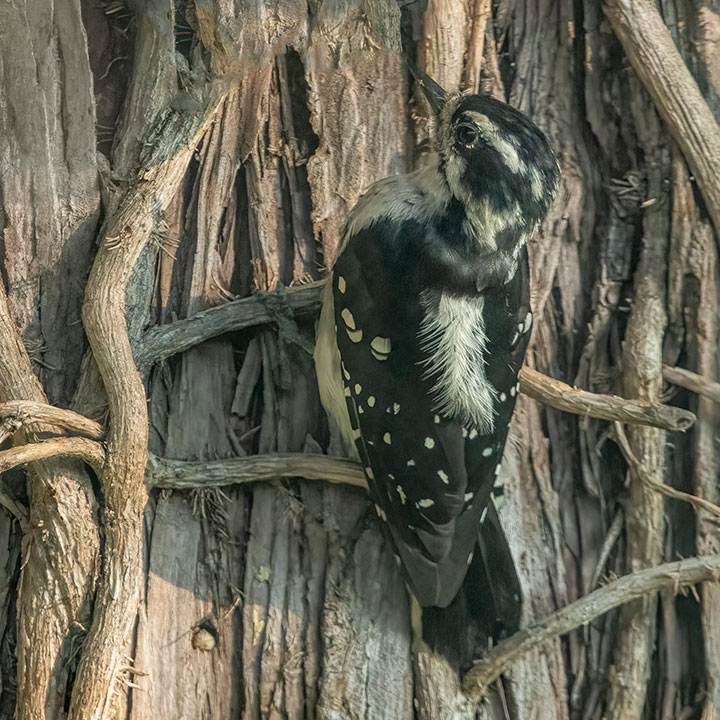 Perhaps my favourite coastal observation was of a bird seen here, but only rarely: a Green Heron. It apparently has a greenish back, although that wasn’t evident. Smaller than the Great Blue Heron, it is seen here fishing. 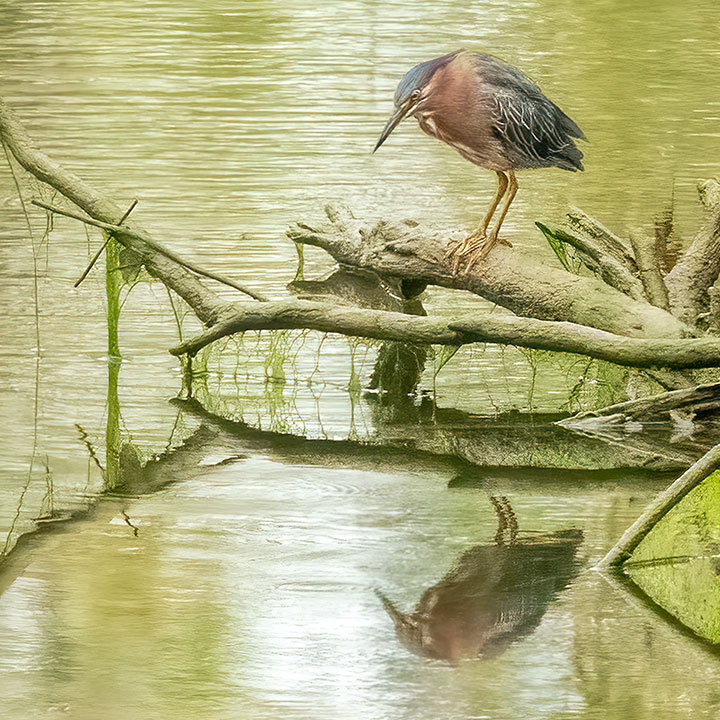 Alas, the Green Heron was spooked by the approach of a Great Blue. 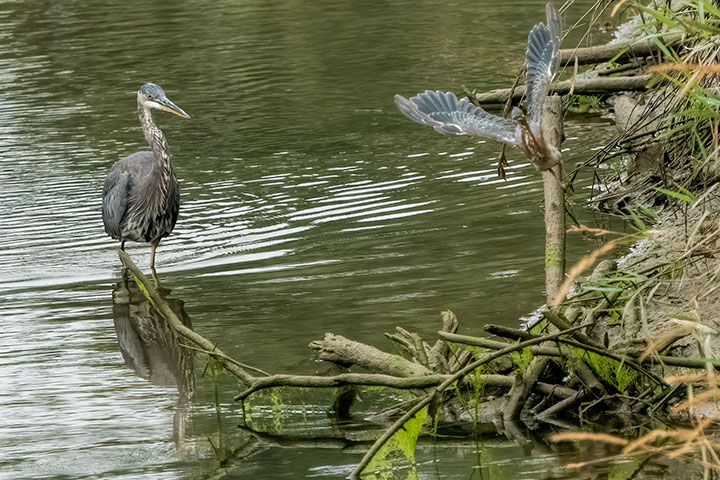 The upside was that I was able to capture a flight shot. 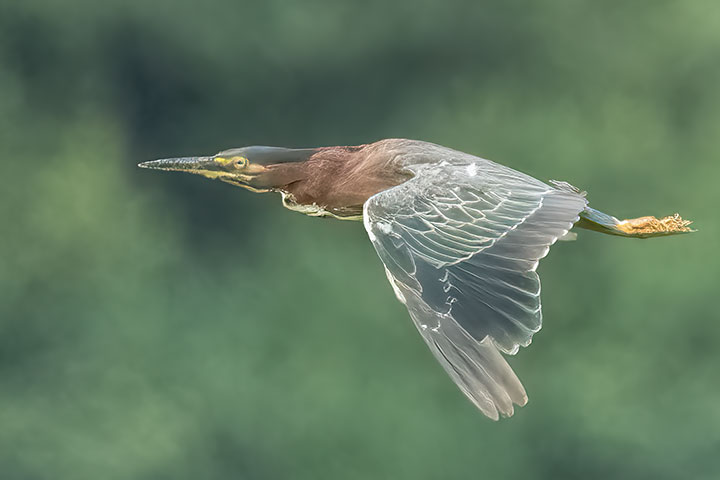 This entry was posted in birds, fish, mammals. Bookmark the permalink.