The glory is a beautiful phenomenon that is only rarely noticed. Its rarity results from the requirement that your shadow must be cast down onto a cloud in the centre of the glory. Mind you, to see your shadow in the centre, you must be fairly close to the cloud, but that was normally the case when seen from a mountain. Thus we get names for it like the Brocken bow and spectre (19th century, Germany) and Buddha’s light (a couple of thousand years, China). The name, glory, is rather old and speaks to the assumed beatification of the person whose shadow appears surrounded by the colourful rings of light.

One of the easiest ways to see it these days is from an airplane, although the type of cloud, the wings, and the seat position often prevent a sighting. As such it is rarely noticed, plus the height of the plane above the cloud usually eliminates the shadow. It has been seen from mountains around Kootenay Lake, but flying in and out of the region provides the easiest observations.

The glory is often seen together with the cloudbow, so, there is an overlapping drop size that is common to both phenomena. Yet, it isn’t perfect. The cloudbow seen earlier lacked a glory (drops a bit too big?), and this glory lacks a cloudbow (drops too small?).

The glory seen on the stratocumulus when flying out from Kootenay Lake is a phenomenon of single scattering. Notice that it isn’t seen in gaps between the clouds where photon penetration has resulted from multiple scattering. The pattern is a series of concentric rings with reddish to the outside and bluish towards the centre. There is a faintly visible third ring. The aircraft is too high above the cloud for a shadow to be seen. 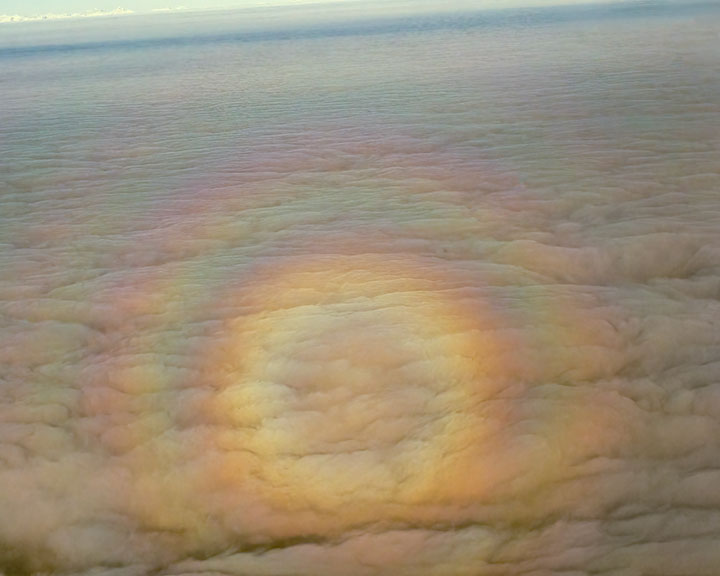