Were the fish flying? Some might quibble that these fish weren’t flying; an Osprey was flying. Yet, if I were to say I flew to Vancouver, would people believe that I had flapped my arms, or would they understand that I had been carried by some flying device?

The sight of a headless fish flying across the sky is certainly one of the oddities of the local summer.

The question is why?

I became aware of the phenomenon of a headless flying fish nearly a decade ago when I was kayaking and an Osprey flew past with one. Since then, I have had many such views. (Sept. 14, 2007) 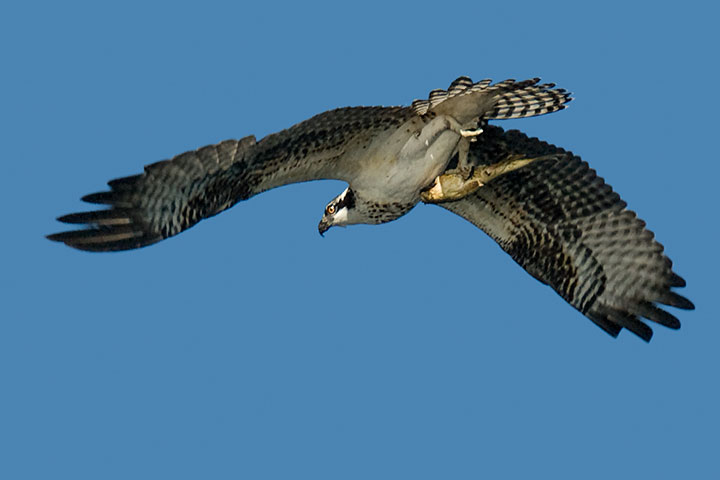 A web search for osprey carrying fish reveals many images similar to the next one: a complete fish. Only a handful of headless ones appear. Does this mean that what is common here is rare elsewhere? It is more likely that this is the result of a photographer’s bias for showing the complete fish. (Sept. 1, 2013) 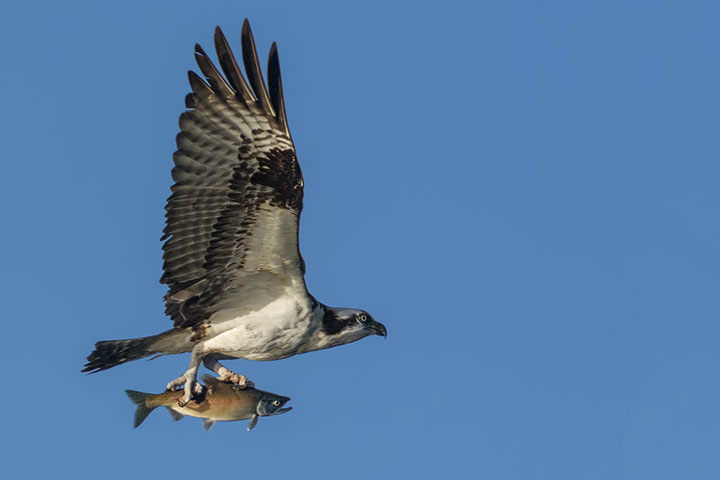 In the above picture, the Osprey is carrying the fish with its head forward so as to minimize drag. When it lands, the head continues to face front ready to be eaten. (Aug. 17, 2010) 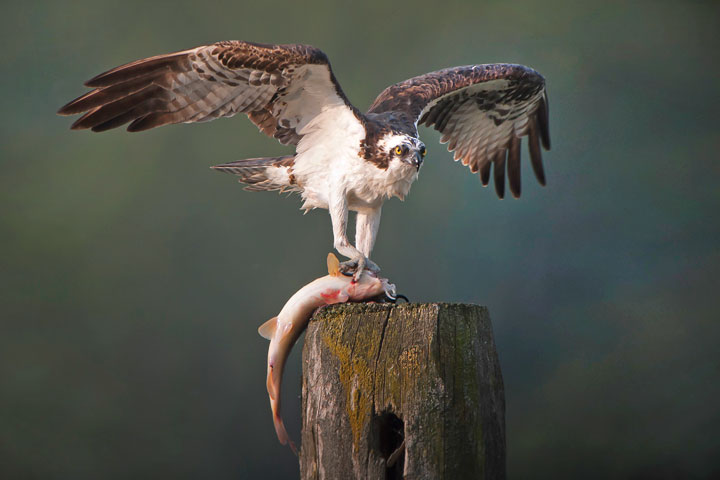 Many birds of prey eat the head first, presumably because brains are tasty and nutritious. However, an Osprey probably eats the head first, rather than the tail, because it merely has to lean down to feed. (Aug. 17, 2010) 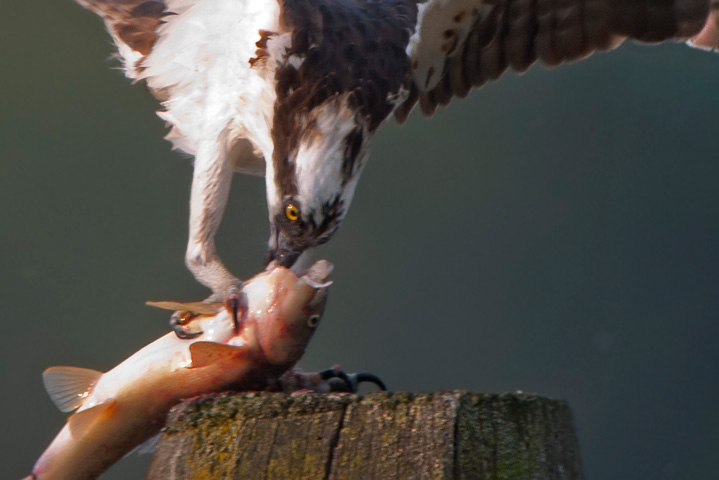 What is striking about the previous two pictures, and the next one, is that the Osprey has not taken the fish to a nest. Rather, it has stopped to snack. When it flies off, it will be packing a headless fish. An Osprey pausing for a quick snack seems to be one of the reasons headless fish fly around the lake. (Sept. 13, 2014) 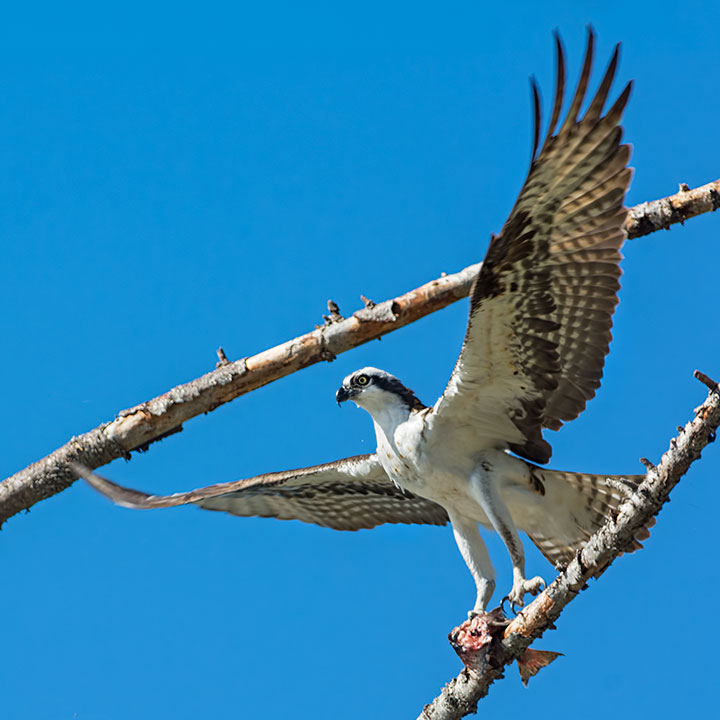 Another reason headless fish fly around our skies is an Osprey’s protectiveness. If an Osprey leaves any portion of a fish unattended, it will be stolen. The primary threat seems to come from a Bald Eagle. This Osprey packing a headless fish is being chased by a sub-adult Bald Eagle. Had the Osprey not taken the fish along, the eagle would have stolen it from the nest. As it was, the eagle failed and the Osprey kept its fish. (Jun. 5, 2010) 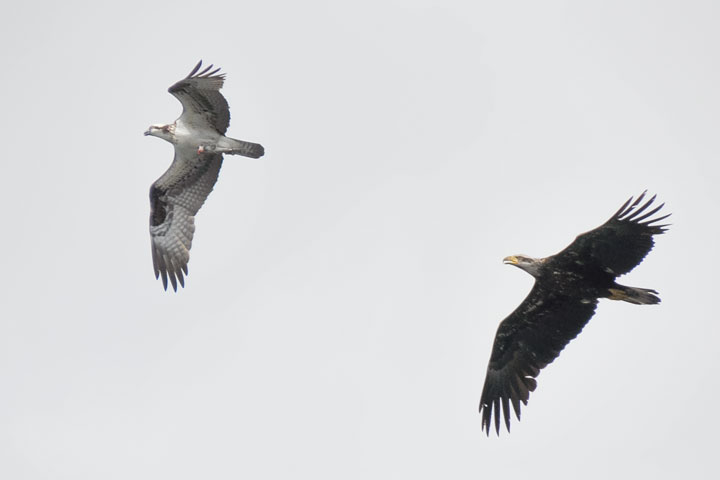 Indeed, any unattended fish will attract scavengers such as this gull hoping for scraps. (Sept. 7, 2013) 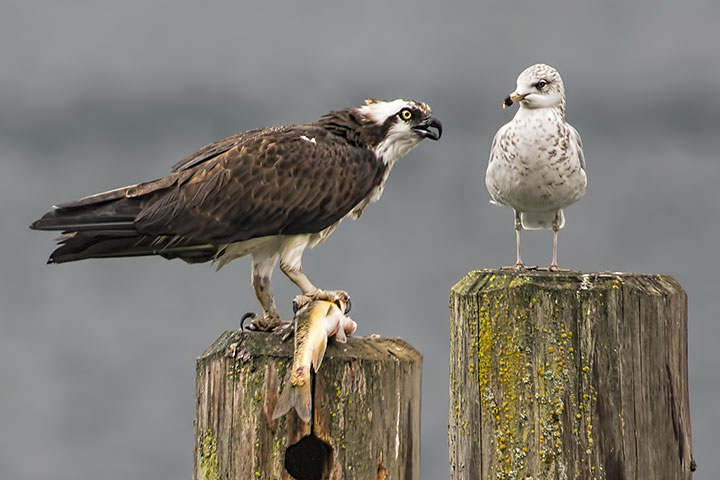 There is another curious wrinkle in the story of headless fish flying: humans. Ospreys are partial to making nests upon human structures, but the humans, themselves, make Ospreys nervous. The dock pilings and the dolphins (channel markers) that Ospreys favour are inherently places of considerable human traffic, so we may have to forgive them for their inconsistency of retreating when a human has the audacity to turn up. (Osprey family on dolphin, Sept. 2, 2013) 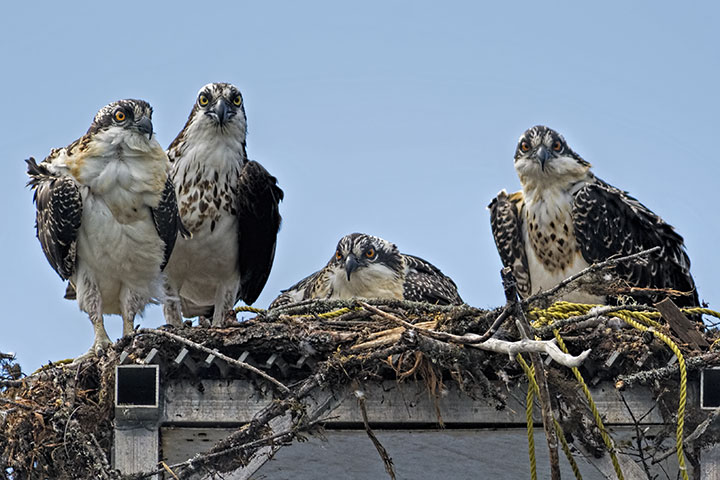 But, why would an Osprey take its fish with it just because a boater docks or obeys regulations and passes a dolphin on the proper side? The boater is not about to try to steal the fish from the nest. Alas, the Osprey does not know this. It only seems to know that when retreating, take along the fish. This instinct prompts an increase in the number of headless flying fish during boating season. (Aug. 13, 2015, FFG) 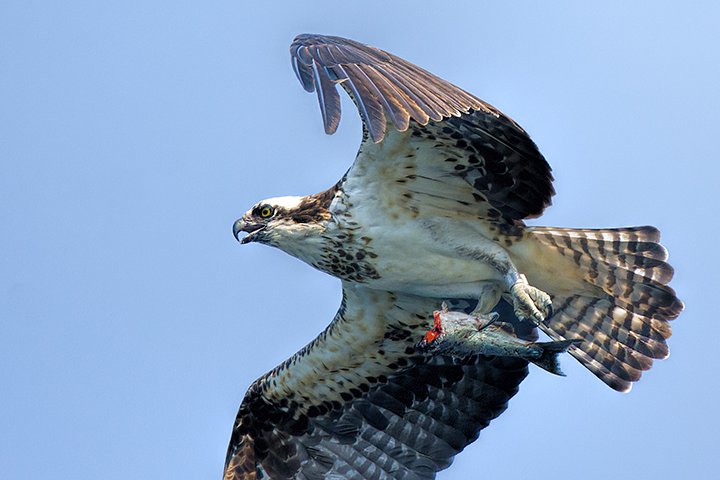 Not to mention, a smaller number of complete, but strangely hairy fish flying about the Lake. (Aug. 13, 2015) 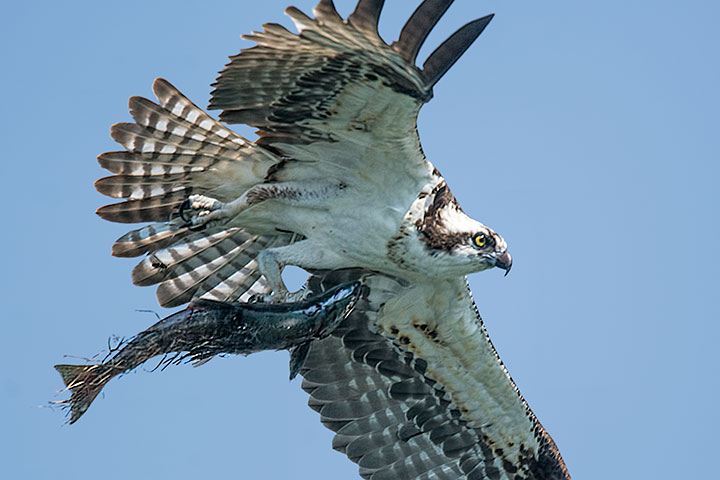 Finn Fraser Grathwol’s picture of the Osprey packing a headless fish is used with permission.