My mother told me of the winter of 1934-35 when the Lake at Nelson froze and people and vehicles could cross on the ice. Indeed, a number of early reports and photographs tell of sternwheelers battling widespread ice on the West Arm of the Lake.

Such extensive freezing has not happened in recent decades. It might be tempting to blame global warming, but that would be wrong: The primarily change is not a result of an abundance of CO2, but a consequence of the Columbia River Treaty.

The Columbia River Treaty resulted in dams that increased both lake depth and flow rate along the West Arm in the winter. The consequence was that days with really cold air were now insufficient to freeze surface water in the face of turbulent mixing of warmer water from below. One no longer expects to see extensive freezing of the lake surface. So, why did I see it two days ago on Thursday, February 9th?

The temperature at the time was not particularly low, being only -3 °C, however, the air was perfectly still. No breeze meant no waves, and no waves meant no mixing of the surface water and equally, no disruption of the thin ice that was now able to form.

The lack of wind and waves has allowed extensive, but thin, ice to form over the Lake, but even now it has avoided the deeper and more rapid flow in the channel. 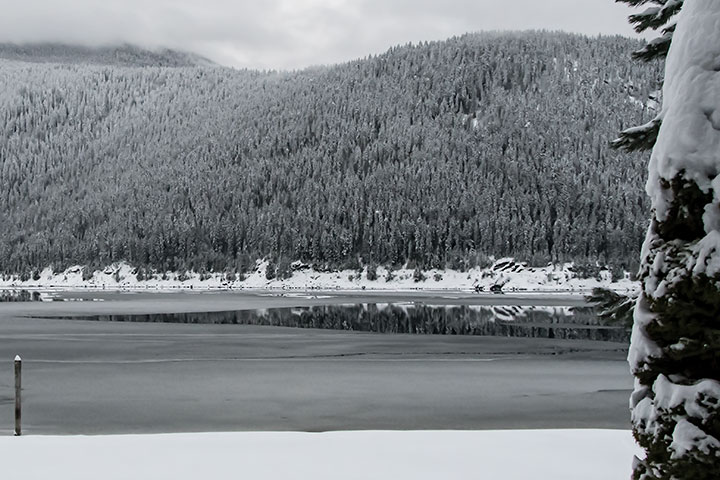