And now for something completely different.
catchphrase from Monty Python’s Flying Circus

The observations made little sense to me. Why did a small group of sand wasps wrap themselves into in a ball? As far as I know, this isn’t a regular activity for either social or solitary wasps.

First, here is a picture of the event. A second image will follow a found explanation.

Sand wasps (Genus: Bembix) flew in and wrapped themselves into a ball. 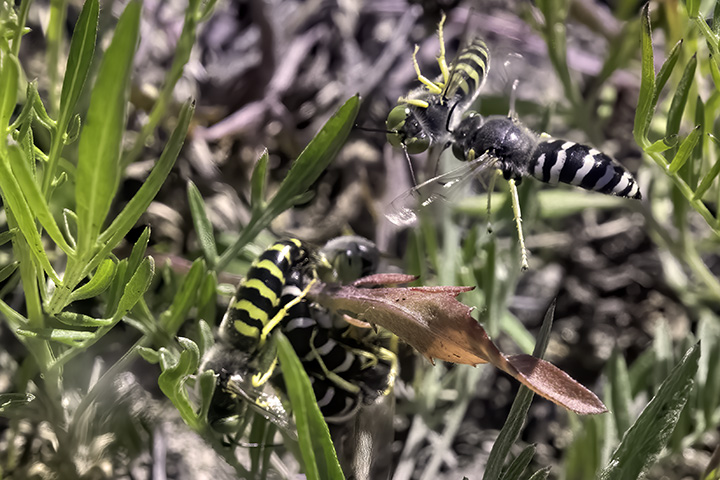 Sand wasps in the genus, Bembix, are solitary, and non-aggressive:

• Solitary   This means that they don’t live in a hive where a queen wasp is the only one that mates and produces offspring. Solitary females each mate and produce their own young.

• Non-aggressive   As they have no need to defend a hive, they lack aggression. One can stand in the middle of a swirling population of dozens of sand wasps, and they go about their activities while ignoring the human in their midst.

In the early summer, sand wasps emerge from their long, shallow, natal tunnels in the sand. They mate, and then the females lay eggs in new tunnels. Into these tunnels are dragged all manner of flies and other bugs that have been paralyzed with a sting. These serve as food for the wasp grubs. Grubs, that by the next summer will emerge as a fresh batch of sand wasps.

Now, let’s return to the mating stage. Males patrol the area looking to mate with a freshly emerged virgin. She then flies up and they mate on the wing. It seems that the mating on the wing does not always go as planned and the two of them sometimes plunge to the ground. At this point, a number of others join in and make a frenetic mating ball.

A mating ball of sand wasps 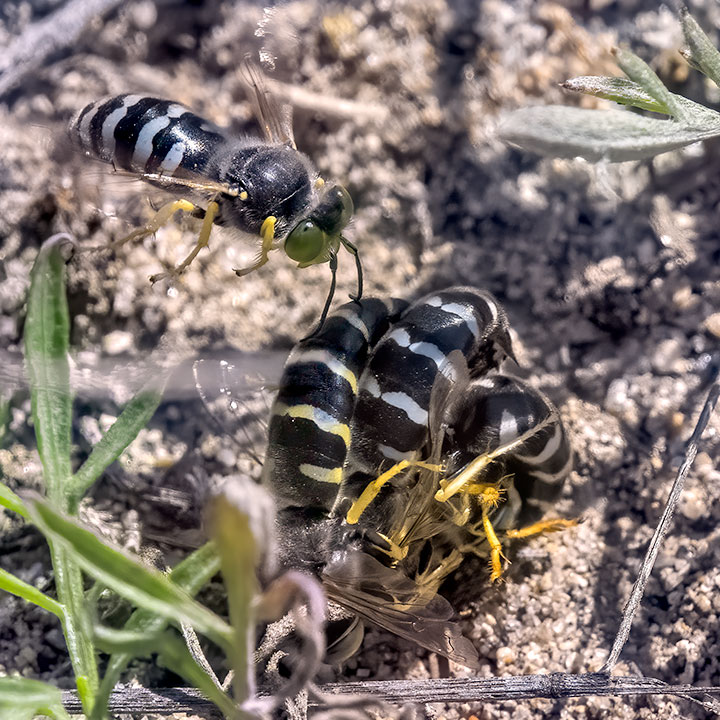 The explanation of this event is found on the blog of Bug Eric.