Meteorological optics have long been a passion of mine: rainbows, haloes, coronae, glories, sylvanshine, mirages, crepuscular rays, twilight, anti–twilight arch, the green flash, and many more. These are some of the things I have seen and photographed elsewhere. Alas, a number of these remain on my shopping list for this area. The glory had been one of the holdouts and so had not yet appeared on this markedly local website.

I realize that hikers and skiers will have often seen the glory around here, but my facility with such activities has declined of late. So, it was with great delight that I received a note from my friend (and wildlife consultant), Doug Thorburn, containing pictures he took of glories while he was skiing in the vicinity of Keen Creek.

The glory (yes, glory really is the technical name of this phenomenon) is often called the Brocken bow by climbers owing to a series of nineteenth–century observations of it from Brocken, the highest peak in the Harz mountains of Germany.

The glory appears as a series of coloured rings surrounding the anti–solar point (the point diametrically opposite the Sun). This is also the location of the head of the observer’s shadow, so an observer must be positioned such that his or her shadow falls on a cloud. Consequently, the glory is usually to be seen from a mountain or aircraft. When the cloud in which the glory is formed is quite close, the observer’s shadow on the cloud becomes visible to produce, what climbers sometime refer to as, the Brocken specter.

Despite the frigid look of these pictures, the glory is formed in clouds of water drops; clouds made of ice crystals will not produce it. It is explained by wave interference: light waves which exit a water drop after entering and reflecting off the back inside of the drop interfere with those which exit the other side of the drop.

Visit Play of Light on this website for links to many local illustrations of meteorological optics.

Doug Thorburn’s picture of a glory near Keen Creek. The glory is the nearly half circle of coloured light near the centre of the picture. He writes: “It was very cool coming up to a mountain pass and looking down the other side to see this.” 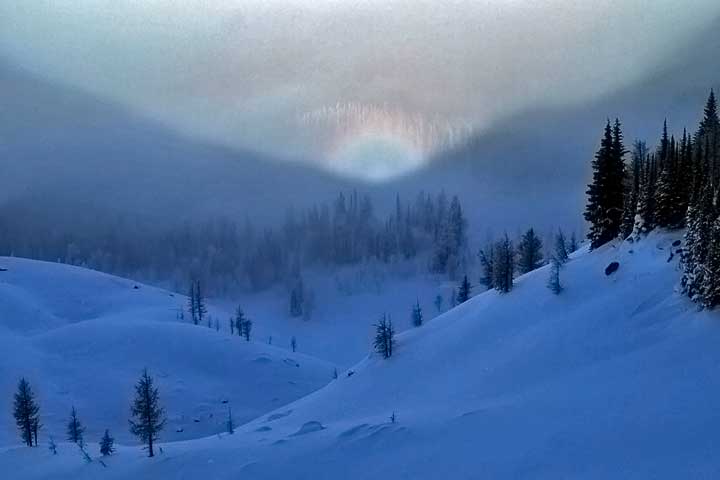 A second glory seen by Doug on his skiing trip. 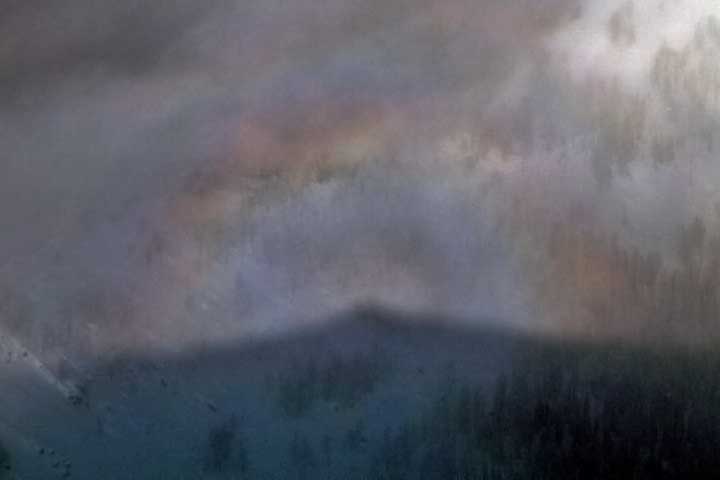 3 Responses to Glory at last