My usual claim for my monthly goulash is that it presents a collection of images that lacked postings of their own. Again true this month, it was also the case that previous postings this September were remarkably few — only three of them. While I roamed around recording many things, subsequent distractions were such that little was added to the blog. Now, I particularly wanted to see bears, and did spot two of them, but interactions were so brief, they resulted in no pictures. Sigh….

I begin with an observation of a Western Toad with an unexpected twist: it is green. Yet, apparently green is an allowable toad variation. Why start with a toad — well, so I can follow it with a toadstool. 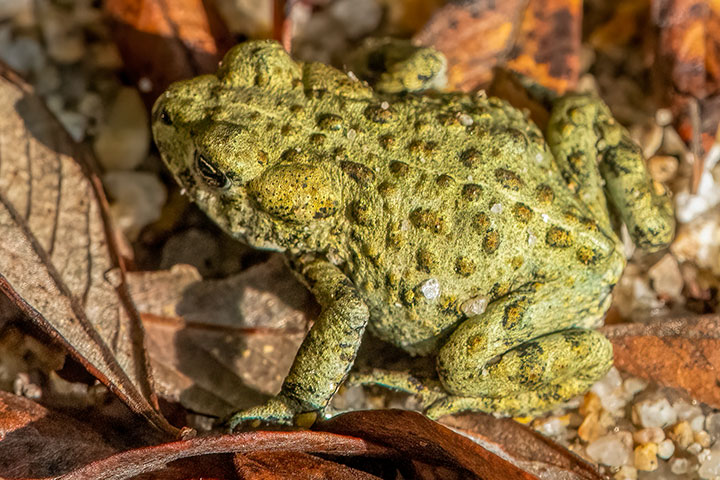 September and October are times to admire the mushrooms, which abound. I believe this is the Amanita muscaria, the cap colour of which can vary from red to orange, and maybe even tan and white. This mushroom is often said to be a toadstool, an informal term long used to describe poisonous mushrooms upon which toads were believed to habitually rest. While things called toadstools are not necessarily poisonous, it is the toxicity of the Amanita muscaria that gives it the reputation of being a toadstool. Alas, I have yet to see a toad sit on a toadstool. 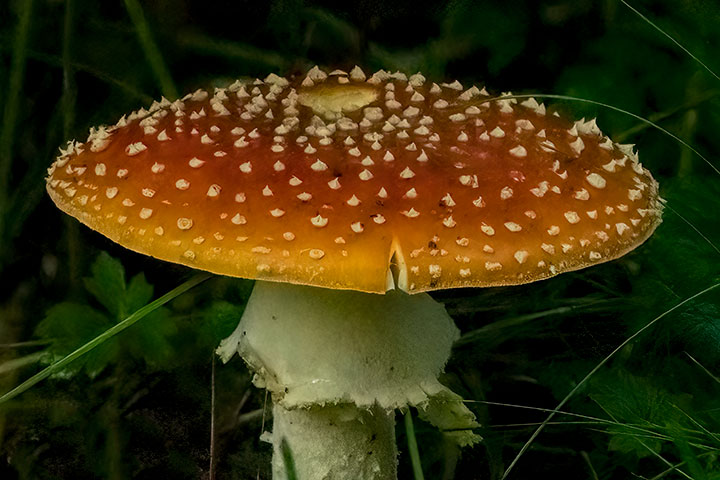 I suspect that these are Suillus sibiricus, also known as the slippery jack. 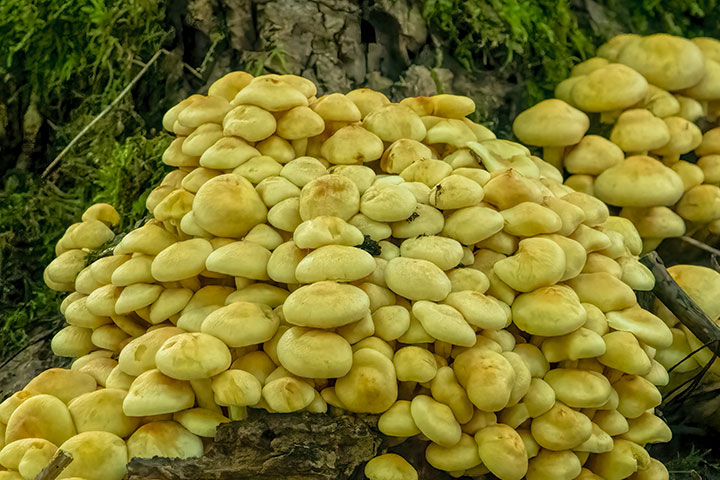 Unfortunately, my knowledge of mushrooms is so sparse that this is included only because it looks nice. But, what is it? (Reader Joanne has identified it as orange jelly spot.) 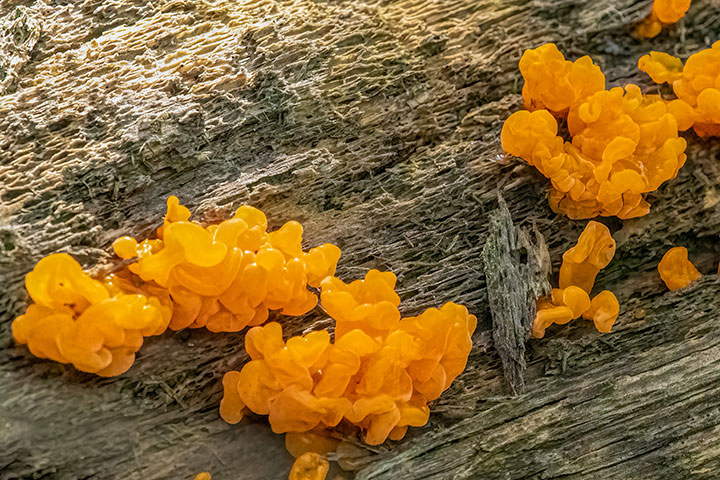 This fish being carried is likely the osprey’s final meal before its migration to Central America. Our  summer’s ospreys have now left us. When an osprey flies off with a freshly caught fish, it usually holds it with both feet apparently so as to better control the fish’s struggles. The osprey has already eaten this fish’s head, so as is often the case with dead fish, only one foot is used to carry it. 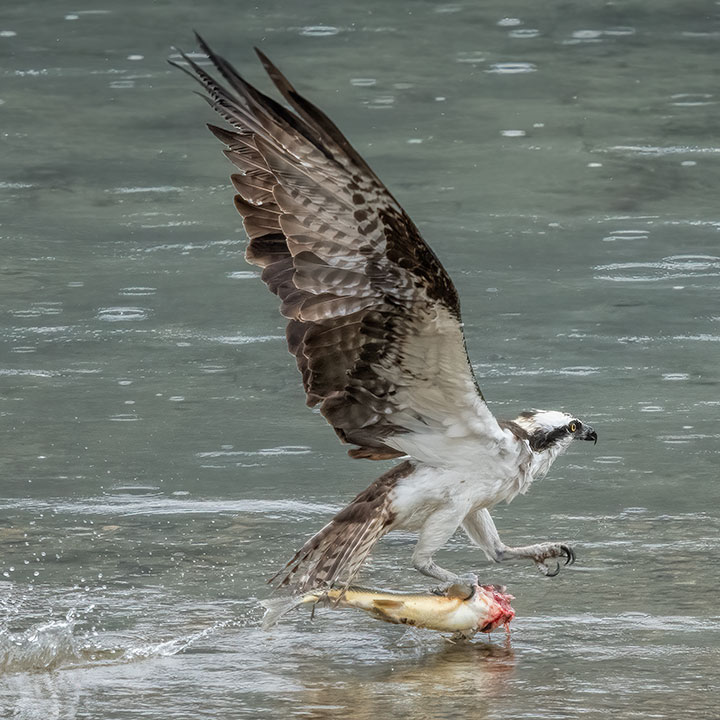 A saffron-winged meadowhawk rests on the beach. When younger, only the leading edge of its wings were yellowish. The male even loses that coloration as it matures, but the female’s yellow coloration increases with age. This one is presumably female. 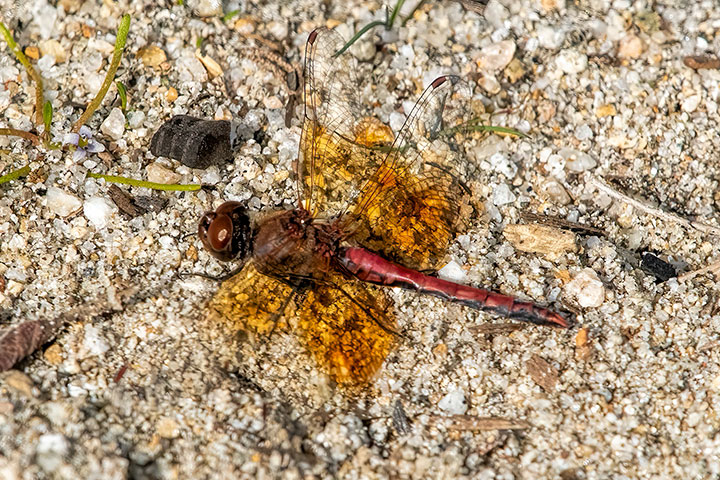 This buck’s antlers have lost their velvet but being rather young, the buck’s antlers are so small that it will not be able to compete successfully for a mate in the forthcoming rut. 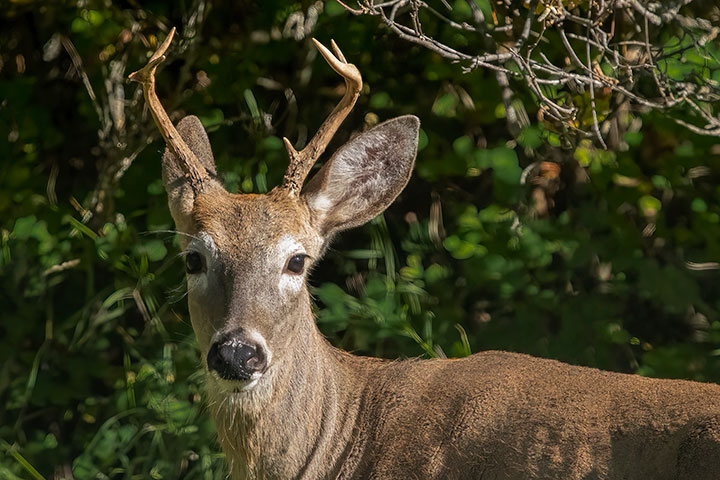 While I did not manage a picture of a black bear, I did manage some of its tracks in mud. The one in the centre is the left hind foot. Behind it (left) is the right front foot. I cannot decide about the track in the front. There is a goose track at the picture bottom. 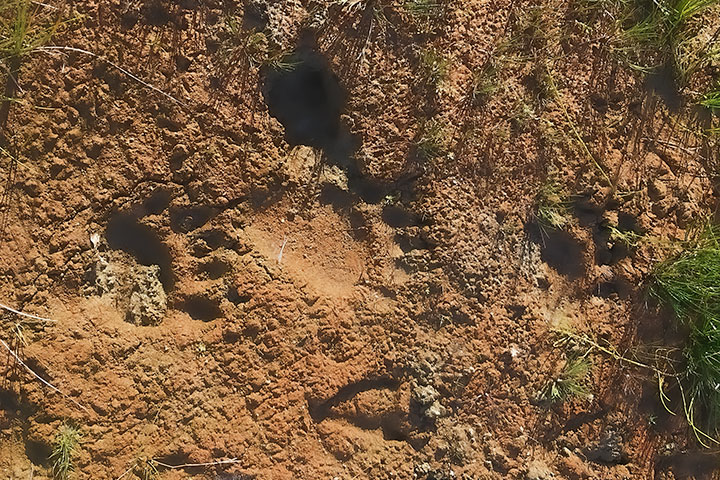 A garter snake on the beach probes its surroundings with its tongue. To do this, the snake did not need to open its mouth but stuck its tongue out through a groove in its upper lip. The tongue flicks around and collects molecules, but what they are is only determined when the tongue is brought back into the mouth. Picture courtesy of Cynthia Fraser. 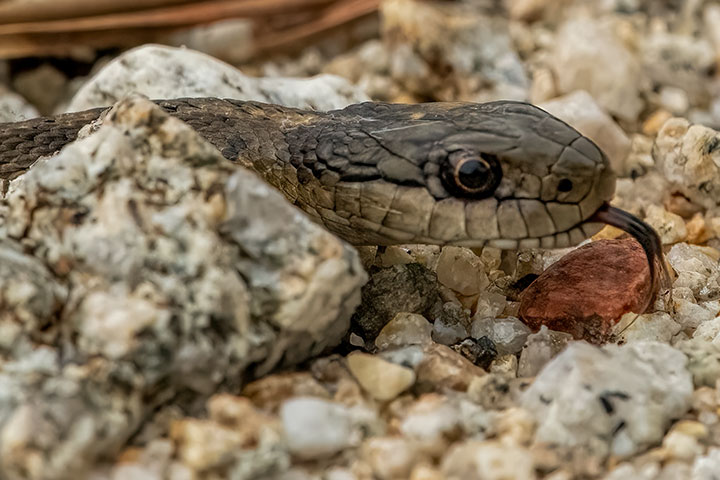 I am used to seeing two species of chickadee: black-capped and chestnut-backed. This is only the second time I have seen the Mountain Chickadee at the valley bottom. 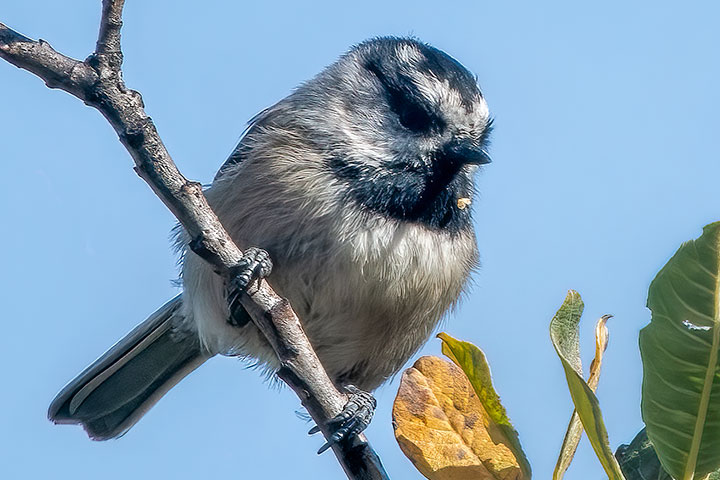 I close with two sky pictures. The first is a refutation of your grade-school teacher who told you that liquid water (necessarily) freezes at temperatures below 0 °C. While water does this when impure and in bulk quantities, there are many circumstances where it does not. So, saying that liquid water freezes below 0°C is only a rule of thumb that sort of works for puddles and ponds. However, smallish, nearly pure, cloud droplets can remain liquid to temperatures of -20 °C and much lower. In this picture, the sharp-edged, whitish clouds are filled with these supercooled water droplets. Hanging below them, the fuzzy grey streamers are made up of ice crystals. They are called fallstreaks and they occur when some of the supercooled cloud droplets do freeze and grow very rapidly as ice crystals which then fall out of the water cloud. 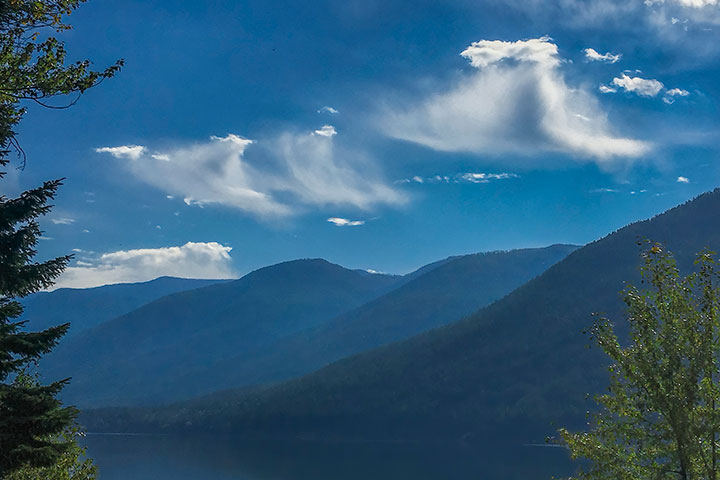 This is a confusing sky. The sharply outlined (aircraft) contrail looks as if it is closer (lower) than the seemingly more distant (higher) clouds. That the contrail is actually above those clouds is evident by the fact that, as the sun is up, the contrail is casting a shadow down upon them. Indeed, it is casting separate shadows on two different cloud layers. That there are two cloud layers is not particularly obvious by just looking at the clouds themselves, but the shadows make the layers obvious. 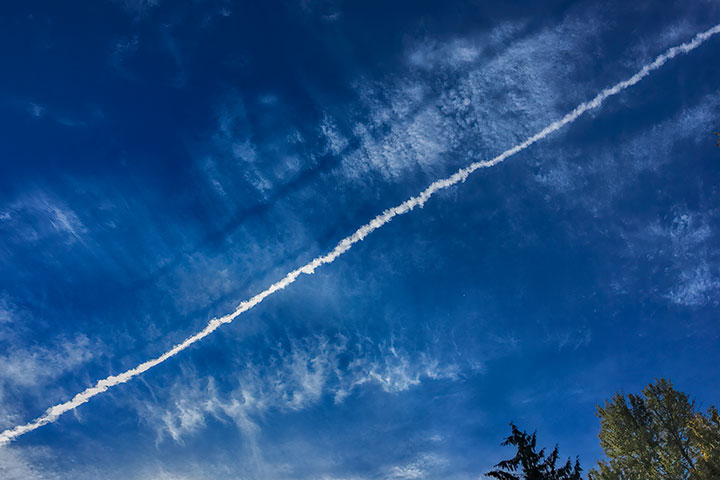 This entry was posted in birds, bugs, herptiles, mammals, weather. Bookmark the permalink.