The explanation for why a bird spreads its wings when flying is obvious: the spread wings aerodynamically support its weight.

However, when a bird is standing or floating on water, its wings are normally, but not always, folded. There seems to be a variety of reasons for a bird that isn’t flying to spread its wings: drying them, warming them, baking parasites, signalling, regaining lost balance, and preparing to fly.

Although this compilation makes it look as if these postures are frequent, they are not. Two of the images below are new, but previously posted images have been pressed into service to illustrate reasons that wings might be spread while a bird is standing or floating.

During flight, this heron’s spread wings aerodynamically support its weight. However, when a bird is perched, its weight is supported by its legs. What would prompt a perched bird to spread its wings? 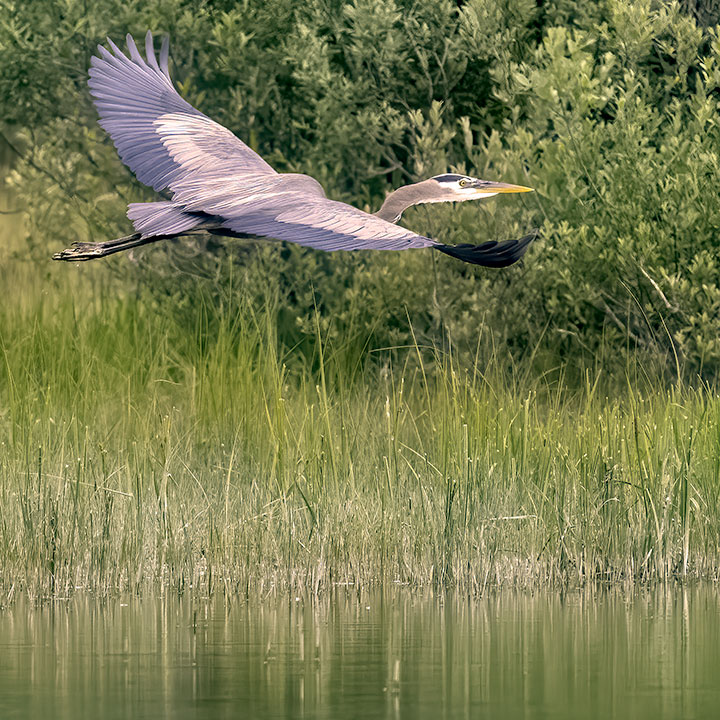 Drying feathers
A compelling explanation for a bird having spread wings when perching is that it is drying its wings. This actually seems to be the case with this Bald Eagle, which had just been fishing for Kokanee in a stream. I have only seen an eagle adopt this pose twice, and on each occasion, the wings were only partially spread. 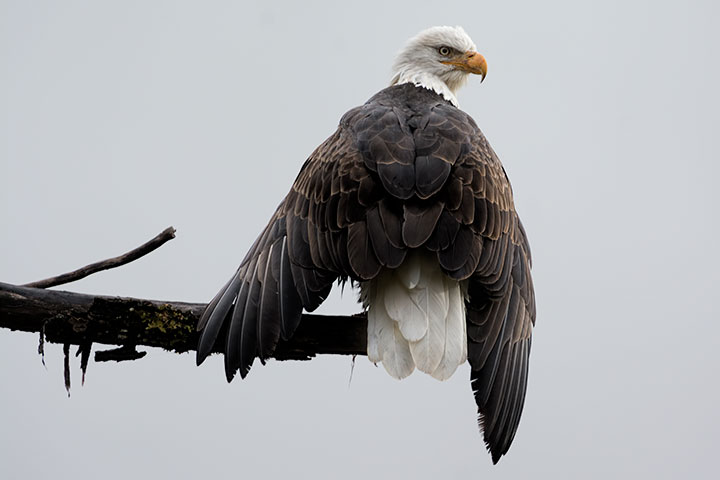 However, following a bath in the lake, this Bald Eagle stands in the shallows, spreads its wings, and shakes off the water. 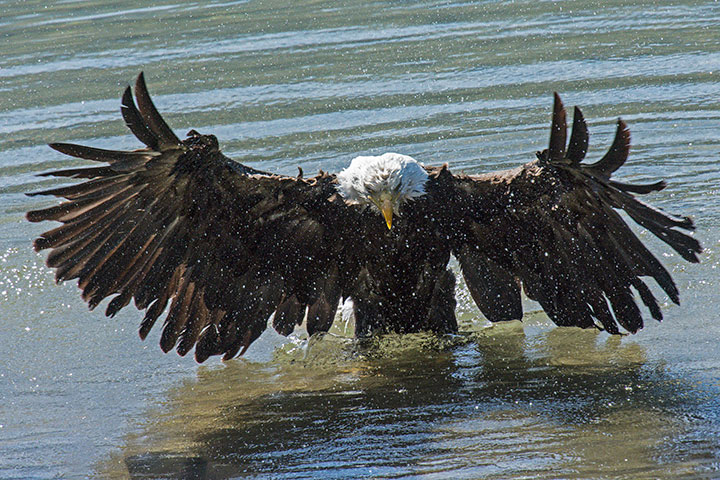 Warming
Another circumstance occurs after a cool night when the bird warms its wings and body in the morning sunlight. This seems to be the explanation for Turkey Vultures exposing their spread wings to the rising sun. 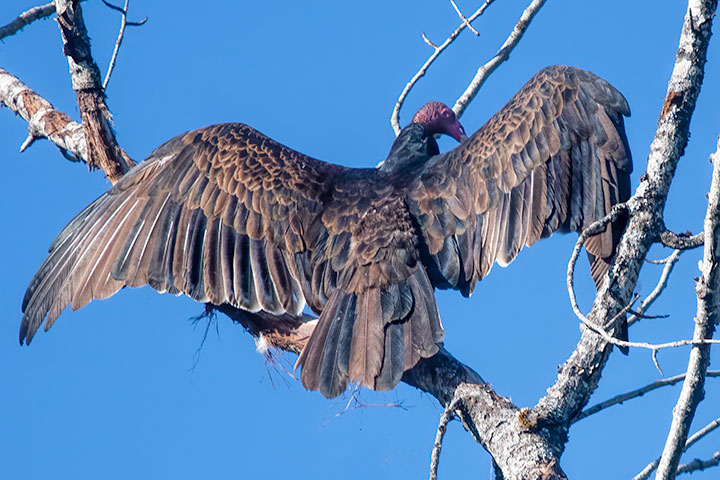 Baking parasites
A curious case of spread wings is illustrated by this Great Blue Heron: it is exposing its spread wings to sunlight so as to bake the parasites in its wing feathers. Its extended neck, and panting, then cools the blood reaching its head so as to prevent the hotter blood from reaching its brain. 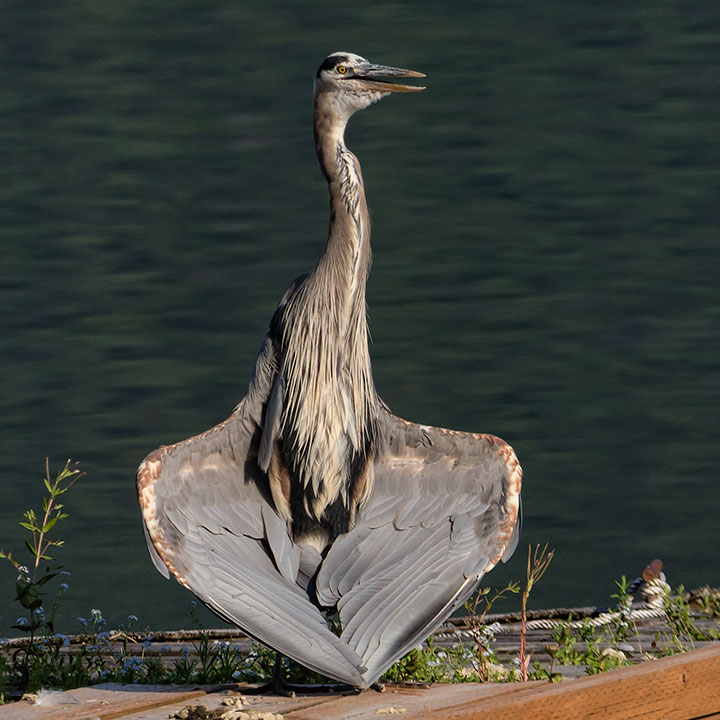 The balalaika-like pose of the heron is mimicked by a Turkey Vulture, so one suspects that it, too, is baking its parasites. 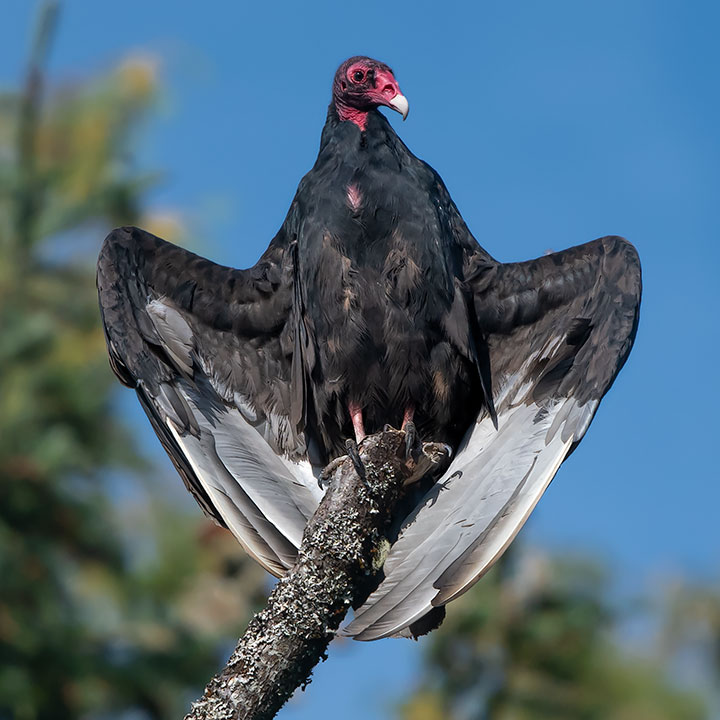 Signalling
The above poses can be fairly long lasting. Of somewhat shorter duration are those shown in the next images. The spread-wing posture can be used to signal. This dipper is telling an adjacent dipper to stay clear of its foraging area. 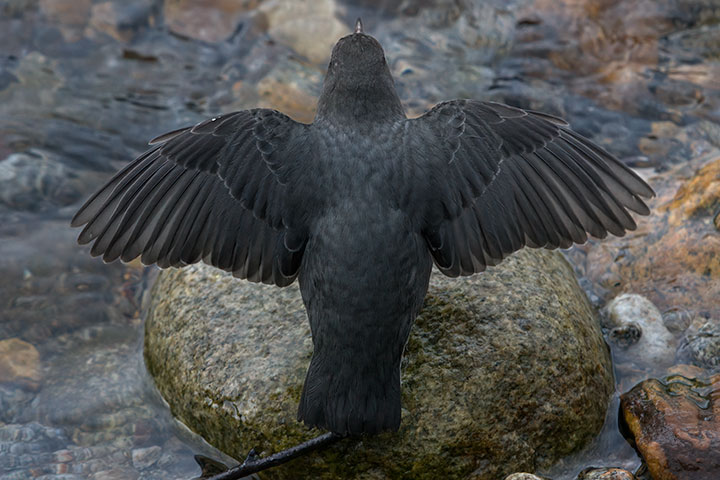 Similarly, this loon is signalling a perceived interloper to move out of its territory. 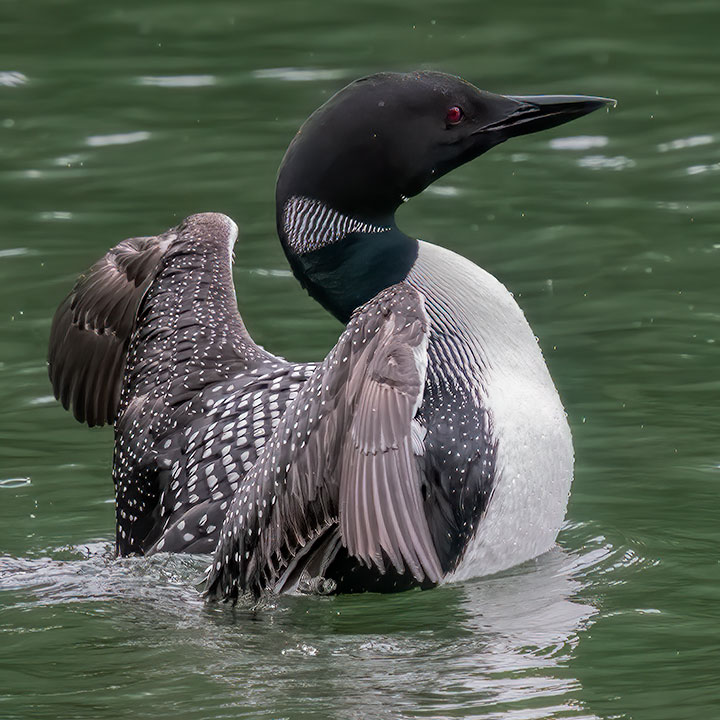 These Canada Geese seem to use synchronized spread wings in their courting. 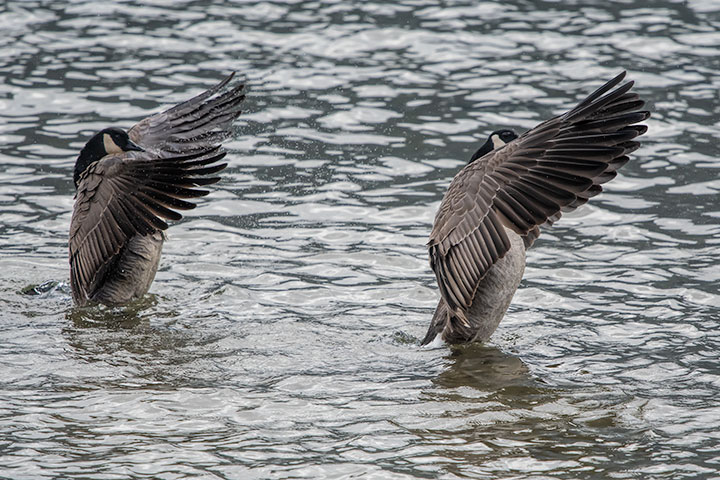 This is one of the ways a male Hooded Merganser signals his interest to a nearby female. 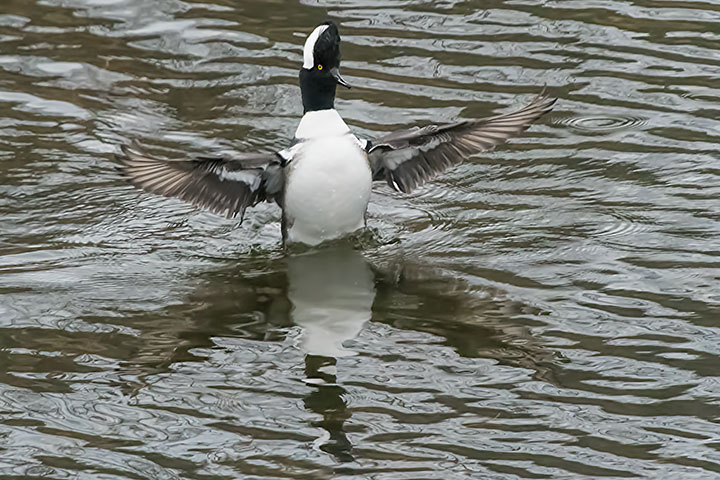 Maintaining balance
When mating, a male osprey spreads his wings both to support its weight and maintain balance. 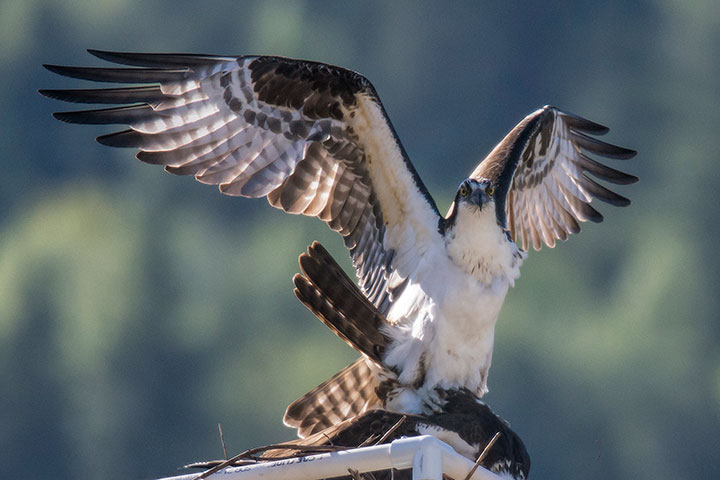 This is also the case for the mating Tree Swallows. 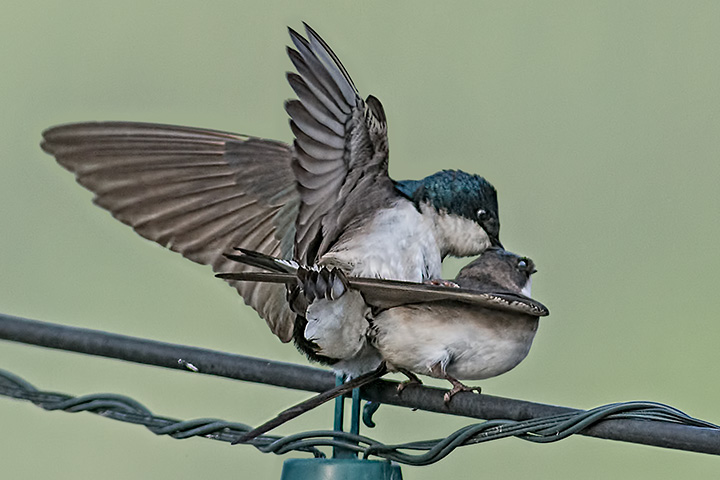 Sometimes a perched bird loses its balance when eating and spreads its wings to regain it. Here a Pileated Woodpecker is foraging on elderberries. 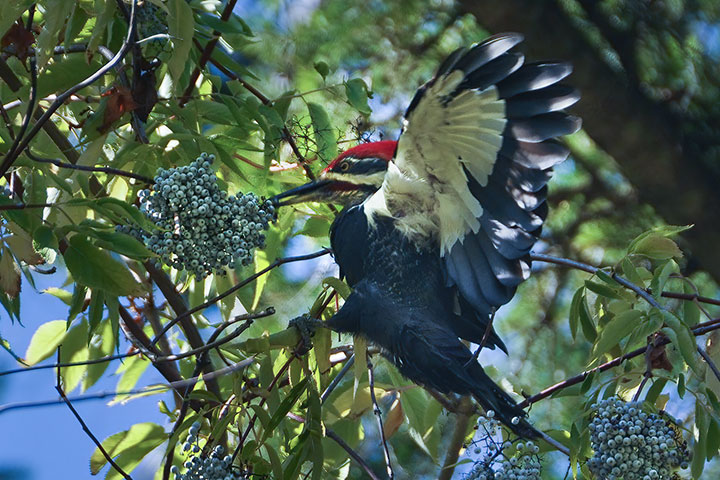 And an osprey briefly uses its wings to maintain its balance as it adjusts the position of its fish. 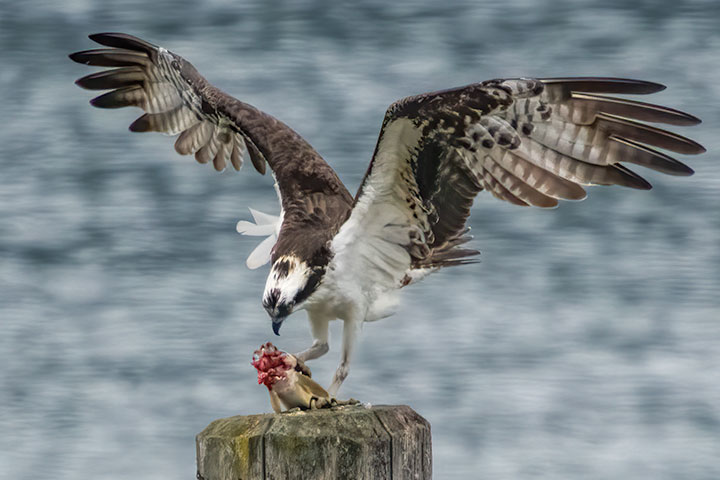 Preparing to fly
This juvenile osprey has yet to fly, but it practices by facing into the wind and spreading its wings. 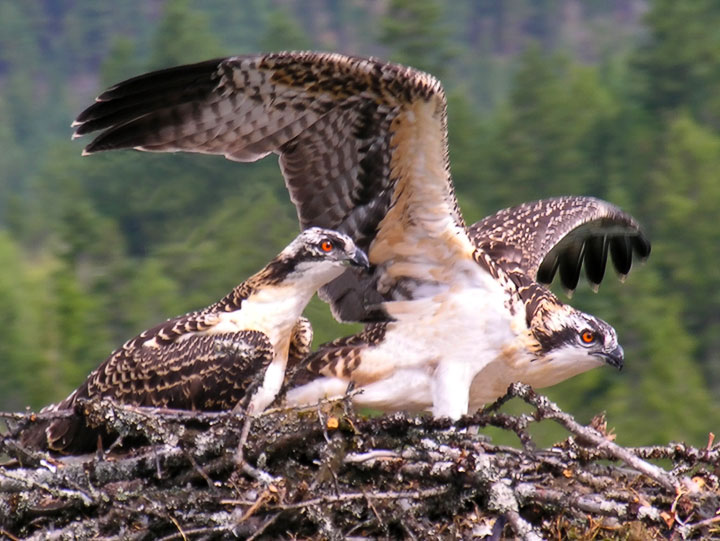 Finally there is the momentary spreading when an adult bird is still perched, but about to fly. 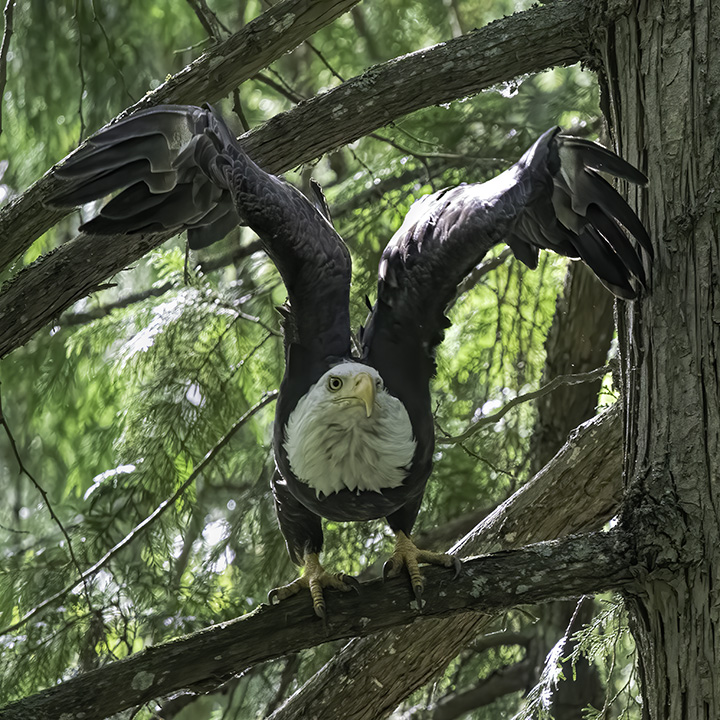